Skip to content
Home / Delve into the Depths in the Kobold Blog / Your Summoned Gamer Ally: Convention Game Mastery, Part 2 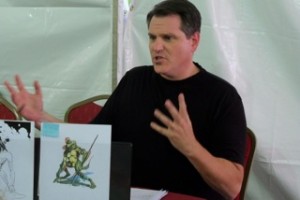 So you’re ready to go and you bring all your gear to the right room at the right time. You find your table and meet your players! Before things really get started, take time to introduce yourself and the adventure ahead. Now the gamers coming to your table will most likely have never met you or each other. Ask them to introduce themselves to the group by giving their names and what games they’ve played. Afterward do the same for their characters. This gets everyone oriented and ready to game. It’s also a handy idea to provide stick-on name tags and use character names so they don’t end up calling each other “elf” or “fighter guy” all the time.

Remind everyone how long the game is expected to last. If it’s going to run longer than three hours, make sure you tell them there will be a fifteen-minute intermission about half-way through. This gives smokers and bladders a break and also gives you some time to refresh yourself before you go back into the ring. Any experienced GM knows refereeing a game takes a lot of energy, so meal up beforehand and pace yourself throughout the event. Everyone at the table made a commitment to be there to play and have fun, so remind players to turn off their cell phones or, if they must take a call, to take the call away from the game table. You’ll keep an eye on the player’s character until he or she returns, but don’t stop the game because of one player.

Remember to keep up the magical mystery of the game. As GM, you are the eyes and ears of the characters. Your job is to whisk them away into a magical world, and that means focusing on what they see, hear, smell, and feel. Watch for boredom, and keep things moving if things get bogged down with mundane tasks such as setting up camp or haggling over the price of a horse (unless, of course, everyone is into it and having fun!). Make it a point to engage with each and every character at least once an hour, and bring out the particular talents that this character brings to the party. Listen to their ideas and plans, and go with the party’s flow of interest. Ask if anyone would like to help out with tracking initiative, spell durations, or monster damage. It makes things flow so much faster and easier if you’re not distracted with these chores and can concentrate on monster options and describing the action!

An unfinished adventure is a disappointment. Pace yourself well. By the break you should be halfway through the adventure. If the party is behind, cut some encounters so the game has a chance to end before your time is up.

If your game is also a playtest for a publisher, have some worksheets ready. At the end of the game, ask your players if they wouldn’t mind taking a few minutes to give some constructive feedback. Both positive and negative feedback is incredibly valuable for making an adventure awesome. Collect the comments and heed them well. Here are some example questions:

How did the GM do running the adventure?

What could be improved?

Be sure to thank your players for attending, and don’t forget to hand them some information about the game they just played. “I survived the Incredible Shrinking Island” on a card is a great way to generate buzz about your adventure. You may even have made some great friends you’ll be happy to see again at the next con!