Skip to content
Home / Delve into the Depths in the Kobold Blog / Midgard Heroes: Clanking Mercenary 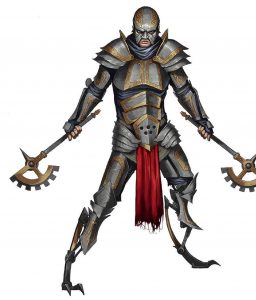 The Clanking Legion is a legendary mercenary company, composed of roughly half gearforged and half beings of flesh and blood.

Fighters who emulate the Clanking Mercenary archetype see the flexibility of flesh in steel and the strength of metal in their own bodies and minds.

Beginning when you choose this archetype at 3rd level, you gain proficiency with your choice of blacksmith’s tools or tinker’s tools.

With 1 hour of work (which you can perform once during a long rest), you can use blacksmith’s or tinker’s tools to temporarily improve the effectiveness of a weapon or a suit of armor. The item remains improved for 24 hours or until the effect is used. An improved effect on a piece of equipment can be used once. This number of uses increases by one at 7th level (two uses) and again at 15th level (three uses). The improvement effects vary by the type of equipment.

Armor (Option 1). When the creature wearing the armor is subjected to a damaging effect that allows a Constitution or Dexterity saving throw for half damage, the wearer can gain advantage on the saving throw.

Armor (Option 2). The creature wearing the armor can gain advantage when making an ability check to prevent itself from being grappled or to escape from a grapple.

Weapon. When a creature is hit with an improved weapon, the weapon’s wielder can choose to add your proficiency bonus to the damage roll.

Starting at 7th level, you have advantage on saving throws against being charmed or frightened.

At 10th level, when you gain exhaustion, you can reduce the number of levels gained by 1. Once you use this ability, you can’t use it again until you finish a long rest. You reduce your exhaustion level by 1 every time you finish a long or short rest, provided you have adequate food and drink.

ARMS OF THE LEGION

Starting at 15th level, you can improve two pieces of equipment when you spend an hour using your Shaper of Metal ability.

At 18th level, as a bonus action you can expend a hit die to negate a harmful condition affecting you. The condition can be grappled, poisoned, prone, stunned, or restrained.