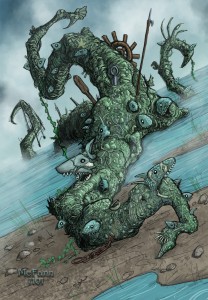 The brackish water bubbled violently, and the creature emerged with a wave of fishy stench. Its massive scaly body was studded with hundreds of staring eyes, each fixed on me. Its tentacles whipped forward as I turned to run.

Brine terrors are bloated, pustulant masses of oceanic detritus composed of rotting fish, seaweed, and nets. Razor-toothed fish heads with staring eyes cover their bodies, and writhing tentacles flail about them. Spawned from waste in polluted and overfished harbors, they drift through the shallows and shamble onto docks to hunt for fresh blood to avenge the fury of the deep.

Brine Terror in Combat: A brine terror attacks with its tentacles, pulling victims to its hundreds of mouths to be torn apart with feeding frenzy. It acts in an unthinking rage, attacking the largest group of land creatures near it. Its hundred staring eyes protects it from flanking, so it is unafraid of being surrounded. It avoids attacking sea creatures with a swim speed unless they attack it. The brine terror emits a thick cloud of stench that always surrounds it, sickening all that draw near…

Nature DC 15: Brine terrors drift along populated coasts, hunting fishermen and dock workers. They grab victims with their tentacles and devour them.

Nature DC 20: Brine terrors are undead that spawn naturally when an area of the sea is threatened with overfishing or pollution. They continue to spawn until the conditions in the region change.

How to Use: Brine terrors are monsters that occur in reaction to wrongs against nature. Sometimes they spawn in retaliation for disregard for the sea, while other times they are called forth as guardians of the deep. Brine terrors can also be easily manipulated by intelligent sea creatures to serve as shock forces during raids.

TRAITS
Hundred Staring Eyes
A brine terror can see in all directions at once and cannot be flanked.

STANDARD ACTIONS
[M] Tentacle • At-Will
Attack: Melee 3 (one creature); +11 vs. AC.
Hit: 1d8+4 damage, and the target is pulled 2 squares and grabbed (until escape). A brine terror can grab up to two creatures per turn.