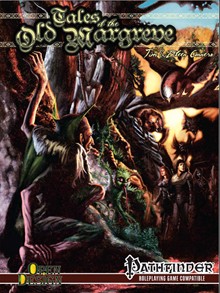 Some days, it just feels like the stars have aligned and everything is falling into place.

That was the Friday of Gen Con 2012—and I don’t mean the fact that the panels went well, or that a seat opened up at the Ars Magica game, although that contributed. I mean that I sat down to run “Grandmother’s Fire” from Tales of the Old Margreve and had it rocking on all cylinders, exactly as it was supposed to be. To be fair, I have to warn you that spoilers follow.

Still here? Then let me continue.

Things boded poorly at first. I had only two players until about six minutes into the slot, and I seemed to be missing one of my pregenerated characters. But, by fifteen minutes after one o’clock, I had a great table of two regular Pathfinder Society players, two newbies, and a friendly older grognard who willingly took up my last pregen—the female elf bard—and managed her with panache.

What followed next was three hours and forty-five minutes of sweet, sweet roleplaying, ass-kicking, improvisational tactics, and some of the hottest dice I’ve seen in a while. They blasted away at ghouls and lich hounds, then agreed to hear the peasants’ plea and visit Baba Yaga. After skillfully interacting with the Fell Crone, they left the Dancing Hut and tracked the thief into Heart of the Forest, where they discovered he’d apparently become the prisoner of werewolves.

While trying to scout out the lycanthropes’ camp, the rogue inadvertently drew them from the clearing with a horribly failed Stealth roll. But quick reflexes and good rolls got Ozla into a tree and out of sight before they could find her. Now close enough for the rest of the party to identify, the characters attacked the werewolves with the declaration, “Time to be heroes.” The irony was delicious, but the cherry on top was Ozla’s pure, brazen courage. Her player looked at me as the other characters quickly debated their charge from hiding and said, “Can I attack from the tree?”

Dive from a tree into a group of four werewolves alone? Go for it! She rolled a 20 for the attack and a 20 to confirm it, doing massive damage in a surprise round ambush that left the would-be hunter dead on the forest floor. She then won the overall initiative, took a 5-foot step and began eviscerating the rest of the pack with a solid hit and another critical, nearly hitting the massive damage point again. By the time the rest of the party crossed the 50 feet to join her, she’d nearly halved their numbers. From this point, I joked, she was Ozla the Terrific, because “she’s terrifying.”

They dispatched the rest of the wolfish hunters and freed the thief of Baba Yaga’s cinders to hear his story. They let the dwarf reavers loose to return home, and bound the thief to lead them to the vodyanoi’s hidden pool. The reveal at the tree bridge was perfect, and the group seemed genuinely sorry as they prepared to face the river fae in his secret pool.

The battle was, to quote them, “epic,” and this gamemaster’s heart grew two sizes that day. They squared off against the cinder-spawned elementals and called out the vodyanoi. They taunted and bantered with the fae, remained steadfast when the first of their attacks failed to hurt it, and then shifted their tactics to wreck him with but minutes left in the slot.

My voice, which began somewhere between terminal smoker and archetypical diner waitress (“wouldja like a cuppa cawfee, sweetie?”) seemed rejuvenated just long enough to let me roll out fantastic sequences of what they called, “great combat descriptions!” and we closed out the slot with the last bits of concluding interaction with Baba Yaga just minutes before the scheduled ending. Ozla’s player asked if she could take her character sheet with her as she rushed off to play Call of Cthulhu and I happily agreed.

I was ecstatic and hustled out to get ready for the ENnies, not even concerned about how the awards might turn out. As far as I was concerned, I’d just run the best adventure right there, and it was a blast! If you haven’t, I strongly recommend running this one at a convention—it’s a great opportunity to take chances and go for glory. After all, you’ll never play those characters again, right? ;)

5 thoughts on “From the Deep Dark Woods of Gen Con…”