Skip to content
Home / Delve into the Depths in the Kobold Blog / Prepared!: The Oath 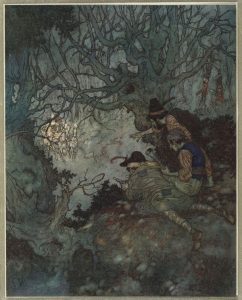 To earn a coin is noble work, to steal one a good trick,

But the secrets of those who make the coin

Are worth more than a gold brick.

The Oath is a short fifth edition scenario that challenges four 2nd- to 3rd-level characters, and it includes the ravenfolk scout, a creature from the upcoming Tome of Beasts book from Kobold Press!

The PCs are passed by a strange caravan in the night; a single ravenfolk named Crolk is being transported in a large cave. The creature makes a gesture for help as the caravan passes. A variety of events occur depending on the PCs’ choices, but eventually the PCs learn Crolk was captured due to his knowledge of a secret emerald mine in the forest nearby. He offers to lead the party to the mine if they agree to escort him to his camp close to the mine’s entrance. He explains that ravenfolk do not break their oaths and assures them the mine is real. Traveling together, the PCs and Crolk must negotiate a dangerous deadfall before arriving at the mine. Once there, the ravenfolk fulfills his oath by bringing the PCs into the mine where he disappears. The mine was stripped of emerald long ago, and is in fact Crolk’s hideout. His greater oath is revealed when the PCs are attacked by Crolk and his flock, who prize the secrecy of their lair above the lives of others…

Dressed in worn but serviceable studded leather armor, Crolk’s jet-black plumage glistens in the light. His movements are distinctly birdlike, but his eyes are deep wells of intelligence and understanding.

Crolk is a member of a small nest of ravenfolk who live in a stripped and abandoned mine in the nearby forest. Crolk and his friends are cunning thieves and swindlers who care little about the lives of others. Crolk takes great pride in his skills at deception and is a practiced liar. He wishes to return safely to his nest and tries to convince the party that escorting him there is worth the effort.

Adventure Element B: The Caravan

Two wagons traveling together appear on the road. Each has a driver and a guard who peers out into the woods lit by the wagon’s jostling lanterns. The first wagon pulls a small wheeled cage that bounces and bumps on the rutted road. Inside, a feathered humanoid dressed in leathers slumps against the bars. Despite the distance, the ravenfolk sees your camp and postures his body in a pleading manner. The caravan soon passes; its light fades down the road.

Crolk’s (ravenfolk scout) mastery of feather speech makes him an excellent gestural communicator. Aside from the obvious plea for help, Crolk’s body movements contain additional information. PCs trained in Insight or Performance automatically know Crolk expressed his capture as being unlawful. A DC 10 Wisdom (Insight) check made by any PC reveals similar information. The caravan is driven by two commoners and guarded by two thugs and one hidden animated armor. There are two possible ways to continue the story.

Freeing Crolk. The PCs may attempt to approach the caravan. They may approach it as it passes or when it makes camp a half mile down the road. The guards are extremely aggressive and point their heavy crossbows at the party as they approach. They are unwilling to provide the PCs with any information about their captive unless convincing Charisma checks are made. Their patron has tasked them with the transport of the prisoner to a nearby keep where he will be interrogated regarding the emerald mine. Continued questioning leads to combat. If freed, Crolk thanks the party and swears an oath (see Crolk’s Oath).

Crolk’s Escape. Crolk escapes the caravan and flees to the PCs’ camp. He is soon followed by the guards of the wagons who give no thought to killing the PCs to recapture their prisoner. After the battle, Crolk swears an oath (see Crolk’s Oath).

Crolk’s Oath. Crolk thanks the party and swears an oath to repay them for their kindness; he takes them to the secret emerald mine if they agree to take him to his nearby camp afterward. Crolk is a convincing liar (Deception check DC 18). If the party refuses, Crolk thanks them again and leaves. Shortly after the incident, Crolk and his two companions (2 ravenfolk scouts) attack the party in an effort to keep the nest’s location a secret.

A long stretch of deadfall blocks the way. Traveling around it will add significant time, and Crolk suggests he can help to navigate the treacherous ground. A keen eye and a solid plan are needed before taking the careful steps required to cross the deadfall.

Working together, the PCs must cross the deadfall. The deadfall is a medium difficulty hazard and rewards experience similar to a medium combat experience. You may assign ability checks and saving throws as you wish, or you may follow the guide provided here:

Keen Eye. Any PC can make a DC 12 Wisdom (Perception) check to find the safest route across the deadfall. A successful check reduces the DC of the ability check in Careful Steps by 1.

Solid Plan. Any PC can make a DC 12 Intelligence (Investigation) check to formulate a reasonable plan to get across the deadfall safely. A successful check reduces the DC of the ability check in Careful Steps by 1.

Careful Steps. Each PC must make a DC 12 Dexterity (Acrobatics) check or fall into the sharp deadfall. Falling into the deadfall triggers a DC 10 Dexterity save to avoid 8 (2d6) piercing damage; a successful save halves the damage. The PCs eventually make it across the deadfall regardless of the damage they take.

*Crolk can assist the party by helping (adding advantage) to the ability check made for Keen Eye, or Solid Plan. He succeeds at Careful Steps automatically.

Crolk leads you to an overgrown clearing where a seemingly abandoned mine shaft in the side of a ridge descends into the dark. The ravenfolk shakes his feathers and prunes itself in delight and hurries off toward the mine. “This is it. Come see! Crolk is not a liar or an oathbreaker!” says the creature excitedly.

Crolk dashes and runs into the mine; he calls for the party to follow him. Once in the mine, Crolk disappears. Read the following when the PCs enter the mine:

Stepping into the mine, you see little evidence of activity. Broken tools sit in heaps and many of the passages are filled with rubble. Crolk is nowhere to be seen. A sudden rustle of feathers is heard from behind. “An oath is an oath,” Crolk says, flanked by two dark-eyed ravenfolk companions, “and I keep mine—all of them. Come, brother and sister. Let’s keep our oath to each other.”

Crolk (ravenfolk scout) and his two companions (ravenfolk scouts) attack the party in the cramped and narrow mine shaft. Behind them is the only way out. Fully armed, one scout stays back and fires her longbow, while Crolk and the other use their flurry of wings and rapiers in combination.

Unstable Ceiling. On initiative 1 of every combat round, there is a chance a piece of the mineshaft’s crumbling ceiling will fall onto the combatants. On a result of 5 or 6 (1d6), a piece of rock drops on a random PC or enemy, triggering a DC 10 Dexterity check to avoid 4 (1d6) bludgeoning damage; a successful save results in half damage.

The three scouts have amassed a small fortune that they keep in various ornate boxes or burlap sacks in their nest. There are 35 gp, 118 sp, and an additional 100 gp worth of gems and precious stones. There are also two spell scrolls (one 1st, one 2nd level) tucked into leather cases.

Who hired the thugs to capture Crolk? What lengths will they go to find those who freed their prisoner? What lies beyond the partially collapsed shafts of the old mine? Why was it abandoned?