Skip to content
Home / Delve into the Depths in the Kobold Blog / Humpday Hazard: Steel of Spell Refraction 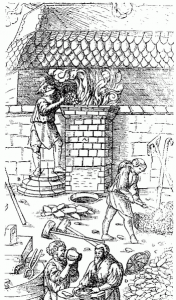 Discovered by noted man of science Dr. Belmont Breslin of Yornica, steel of spell refraction is an alloy formed from a naturally occurring ore with unusual properties. While it is an excellent conductor of vibration and sound—hence its use in superior musical instruments—steel of spell refraction is nonmagnetic and distorts arcane energy that washes over its surface.

Most commonly, steel of spell refraction is used to reinforce masonry walls since it is lightweight, durable, and tends to absorb vibrations that would otherwise crack and sunder stone. However, it is not uncommon to see the material smelted into other forms, such as plates. Armor and shields might also be forged from the material; unfortunately, the process is much too lengthy and costly to see regular use…

No check is needed to notice the steel bands

Trigger When a creature within 6 squares of the steel of spell refraction misses with a ranged attack possessing the arcane keyword, the hazard attacks

Attack
No Action           Ranged 6
Target A random creature within line of sight of the attack’s original target
Attack Level vs. the defense targeted by the refracted attack
Hit As the original attack; miss effects are ignored, as are any effects that do not trigger on a hit

Countermeasures
◊ With a standard action and a DC 20 + 1/2 level Dungeoneering check, you can polarize a square of the steel of spell refraction, negating its refractive properties; if 5 or more squares of the hazard are polarized, it is disabled

◊ You may attempt to “bounce” a ranged attack with the arcane keyword off the hazard to hit a target you do not have line of sight to: select a square of the steel within line of sight of both you and the intended target (the intended target must be within 6 squares of the hazard); make an attack roll against the target with a -10 penalty, and on a hit, the target is affected as normal; on a miss, the spell is refracted normally, randomly targeting creatures that have line of sight to the refracting square

Creatures that rely on arcane attacks tend not to lair in areas where the hazard is present, as it makes their powers too random to be reliable in battle. On the other hand, creatures with an affinity for sound and thunder congregate in dungeon chambers reinforced with the steel for no other reason than to hear their own voices reverberate across the walls. Perception checks to hear creatures within 12 squares of the steel gain a +5 bonus.

A GM might build combat encounters or puzzles which require the PCs to reflect spells to hit hidden enemies or trigger concealed switches. Monsters might also exploit the hazard, attacking PCs from around corners or from raised alcoves.

Though it has not been corroborated, one group of adventurers claims to have encountered a golem forged from steel of spell refraction.