Skip to content
Home / Delve into the Depths in the Kobold Blog / Holy Women, Demon Fighters 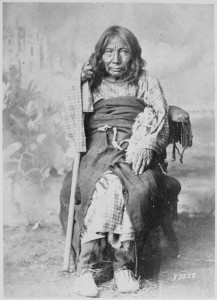 The Cherokee people inhabited parts of what is today Alabama, Georgia, North Carolina, South Carolina, and Tennessee. They were a woodland folk, building permanent or semi-permanent villages along streams and rivers in the mountainous country of the southern Appalachian Mountains. These “Principal People” (as the Cherokee call themselves) migrated south from the Great Lakes 1,000–2,000 years ago to settle in the Appalachian Mountains. Among the Cherokee, women traditionally held a great deal of power, both politically and spiritually. Many women were holy women, or medicine women. The medicine woman was part healer, part advisor, and part spiritualist.

Many years ago, a medicine woman known as Running Deer lived among the Cherokee. A demon called Ew’ah made its way into the land and began killing the people as well as the wildlife, and many warriors died trying to slay the creature. One of the warriors was the husband of Running Deer, and she sought revenge for his death. Consulting other medicine men and women, Running Deer made a mask from a bobcat’s face, which was enchanted so that it would turn the power of Ew’ah back on itself. Running Deer tracked down the Ew’ah and surprised it, so it looked upon her masked face and fell victim to its own maddening magic…

Note: In American Indian culture, a witch is almost always an unequivocally evil person. As such, though this archetype is for the witch character class, it should always be referred to by the archetype name of demon hunter or as a medicine woman/man.

The demon hunter is a specially trained medicine man or woman that is familiar with demons and evil fey and can hunt them down and dispatch them.

Sense Demon (Su): You can sense whether or not a demon or evil-aligned fey is nearby, even if the creature is invisible or hidden. Using this ability is a standard action with no limit on the number of uses per day. You must concentrate to maintain the sense or spend another standard action to reset it. Casting a spell or hex interrupts the concentration. The range of the demon sense is 60 ft., increasing to 90 ft. at 5th level, 120 ft. at 11th level, and 180 ft. at 17th level. This ability replaces the witch’s hex gained at 1st level.

Banishment (Su): You have the ability to send demons and evil fey away for good. When banishing a demon, the subject of the ability must make a Will save (DC 10 + 1/2 your level + your Int bonus) or be sent to its home plane (in the case of fey, they are sent to a random evil-aligned plane). The use of some special holy objects (such as Running Deer’s cat mask) adds +2 to the DC, and up to two different items may be used for a total bonus of +4. This ability replaces the witch’s hex gained at 10th level. At 10th level, this ability affects a number of HD of demons or evil fey equal to your level, increasing to a number of HD equal to twice your level at 20th level.