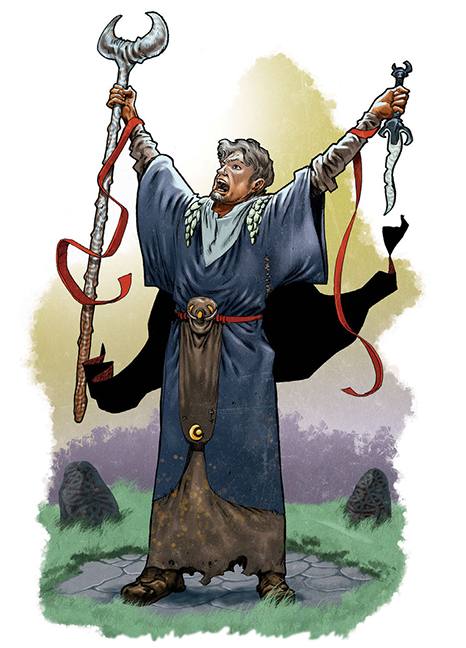 The theurge is one of the most popular classes in our New Paths Compendium for Pathfinder RPG.  Now, Ryven Cedrylle offers this distinctive class for your 13th Age roleplaying game…

Wizards cast spells. Clerics utter prayers. Sorcerers draw on their magical bloodlines and druids draw on the power of nature. You do none of these things, or perhaps all of them. For you, magic is simply magic, regardless of from whence it arises.  You are not bound by the precepts of the arcane or the divine. You do as you see fit, limited only by your ability to channel the energy you desire through your very being. Others call you “theurge” for your ability to call upon divine magic without the sponsors of the gods. Perhaps you do in fact have a relationship to a deity that assists you in your work. On the other hand, you might be your own god.

Play style: With its free-wheeling style of combat magic, the theurge is designed for new or experienced players who want to take on the role of a spellcaster without the complexities of preparing a spellbook or suite of prayers. Players who enjoy making lots of choices or exploring a class’ potential for hidden gems may find the theurge a bit underwhelming. Theurge characters model fictional characters such as Gandalf the White or Albus Dumbledore.

Ability Scores: As a theurge, your magic might come from rigorous study, powerful faith or channeling magical energy in a brute-force fashion. Add +2 to your Intelligence, Wisdom or Constitution so long as you haven’t added to that score with your racial bonus. Whichever stat you choose is the one you will use for attack and damage with your MAGIC attacks (see below).

Races: Many dwarves prefer the path of the theurge to that of the wizard, because they don’t have to rely on elven traditions and rituals to accomplish similar feats, and it fits well with their strong religious culture. Gnomes enjoy the rebelliousness of accessing one type of magic via another type and blending them. Humans stand astride various traditions, making the theurge a natural fit. Half-elves and half-orcs, already neither one race nor another, relate to the bridging nature of the theurge’s craft.

Icons: Icons who are strongly associated with either the arcane or the divine view the theurge with some distrust  or even hostility for crossing long-respected boundaries. Conversely, those who traffic in demonic or necromantic magics make very good use of theurge abilities.

Gear: At 1st level, a theurge has a focus of power – an implement through which she directs her will. The implement may be traditional, such as a wand or holy symbol. It can also be personal, such as a charm, tattoo or fetish.

The theurge might carry a simple weapon, but generally avoids the use of armor unless she takes the Armored Caster talent.  Theurges with some real-world experience have a small savings of about 25 gp to begin with. Those who are venturing forth into the world for the first time have 1d6 x 10 gp.

Armor: Armor is not usually a strong point for the Theurge. She must spend a great deal of time studying and learning to blend the various magical traditions which doesn’t leave much time for warrior proficiencies.

Weapons: Magic is the theurge’s weapon, plain and simple. It is at her beck and call all day, every day. She may throw a fireball one moment, entangle opponents in vines the next, and then drain vitality with a vampiric touch. She is also versed with a few simple weapons should the occasional pesky anti-magic field come into play.

Miss: damage equal to your level

Choose from two of the following damage types: holy, fire, cold, lightning, thunder, acid, poison. You can deal these damage types (in addition to untyped damage) with your MAGIC attacks. Your attacks don’t deal additional damage simply for choosing a damage type.

Epic feat: You may deal damage of any type.

Twice per encounter, allow a nearby ally to immediately spend a recovery as a quick action.

Adventurer feat: You can use this ability three times per encounter instead of twice.

Champion feat: Once per day, an ally may use a free recovery (regains hit points as if she had spent a recovery without actually spending a recovery) with your Touch of Life.

Epic feat: Once per day, double the amount of healing (but not recoveries spent!) your Touch of Life grants.

Because you lack the structure of spells or prayers,  ritual magic costs you more than it does wizards and clerics. Most of the time, giving up one of your recoveries in place of a spell is enough to perform a lasting magical working. (See Rituals in chapter six of the 13th Age core rulebook for more on rituals.)

Should your skill check fail while performing the ritual, your GM might rule that you lose a second recovery. A few rituals may require sacrificing gold or magic items for extraordinary effect. If the result you’re going for is so extreme that the GM tells you it requires sacrificing a life, consider attempting a different ritual or placating the GM with a direct offering instead. Gifts of pizza and dice work wonders.

You can attack additional enemies by decreasing the size of your damage dice. For each die size you step down, you can attack another enemy who is engaged with you.

Adventurer feat: You can target multiple nearby enemies with your attack instead of just engaged enemies.

Champion feat: You can target multiple far away enemies with your attack so long as they are also nearby to one another.

Epic feat: You can target multiple enemies regardless of distance.

You may choose to shrink your damage die pool by one before stepping back any dice for Mass Enchantment (assuming you have that Talent as well). If you do, you may cause your target(s) to be hampered or stuck (save ends) on a successful attack.

Adventurer feat: When you shrink your damage pool, any staggered targets hit by your attack can instead be dazed, weakened or vulnerable (save ends).

Champion feat: Once per encounter when you shrink your damage pool, any targets hit by your attack can instead be dazed, weakened or vulnerable (save ends)

Epic feat: Once per day when you shrink your damage pool, any targets hit by your attack can instead be stunned or confused (save ends). You may spend a recovery during a quick rest once per day to regain this ability.

Once per encounter, you can add +2 to your own or an ally’s AC as an interrupt action.

Adventurer Feat: You can add to PD instead of AC.

Champion Feat: You can use this talent twice per encounter.

Epic Feat: At the start of combat, roll a d4. For the first round in which the escalation die matches that number, you and all your allies get a +2 boost to PD and AC.

Once per encounter, an ally can reroll an attack or saving throw as an interrupt action.

Describe your MAGIC attack as being a summoned creature, and spend a quick action. If you hit, the target must make a disengage check if it moves from its current location. A failed check results in the target taking 5 damage per tier, of the Conjurer attack’s damage type.

When you roll initiative, you can choose to channel additional might as a free action, raising your MAGIC damage die to d10. This is a taxing endeavor, and leaves you unable to spend recoveries during this encounter. If you are dropped to 0 HP and would normally spend a recovery to stand back up, you instead stabilize and continue Fighting In Spirit (which for you is probably a quite literal thing).

Champion Feat: Once per encounter when you hit with a 16+ on a MAGIC attack, regain HP as though you spent a recovery.

Champion Feat: You do not suffer any penalties for attacking or casting in any armor.

When you rest for the night, you may roll a d6. On a 6, you have a dream that gives you useful or otherwise unknowable information about the adventure you are on. On a 5, you also get that information but your dreams are frightful or disturbed; you regain all of your HP but only enough recoveries to have six available to you. On a 4 or less, the GM can choose to spout bizarre gibberish at you that may or may not mean anything.

Champion Feat: Roll 2d6 and choose whichever result you like.

Your mixing of arcane and divine magic has led you to study Truespeak, the forbidden language of creation. This gives you the +5 Truespeak background for free.

To use Truespeak you must know the Truename of the object or creature you intend to affect with it. When you spend a full heal-up in the presence a creature or object (either because it is willing or can’t escape from you), you can learn its Truename. Write that name down on your character sheet. Knowing a creature or object’s Truename confers the following benefits to you, and only you:

By day, Ryven Cedrylle is a pharmaceutical chemist at a small firm out in Research Triangle Park. By night he is a raging RPG enthusiast, hungrily devouring podcasts, books and videos on the topic. He also spent some time in seminary, volunteers with local charities (often alongside his wife) and occasionally dabbles in astrology (readings available upon request.) You can see more of his design work at Mystic Theurge Workshop. 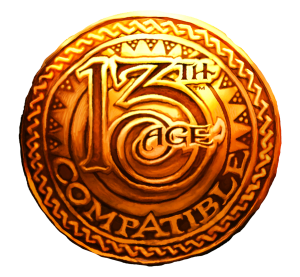