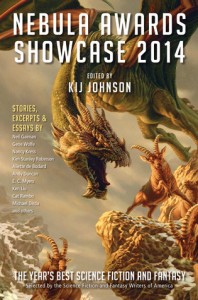 This collection of Nebula Award winners has been published annually since 1966, and the Science Fiction & Fantasy Writers of America chose these stories and the editor of the anthology. You’ll find that this collection contains contributions from some of the best of the best, and it includes poems, novels, novellas, short stories, and much more.

Most of the content in this year’s anthology leaned toward science fiction, and much of that felt very old school in subject matter, but not in a bad way—lots of alien worlds and alien abductions. I would sum up this year’s collection as being esoteric excellence. Reading this book was very similar to watching the Academy Awards. In fact, many of the stories were the written equivalent of some of the movies that win Academy Awards. The book starts talking about the Science Fiction & Fantasy Writers of America, then transitions into the history of the Nebula Awards and finishes with the 2014 balloting. Then the book is broken down into the winners of each category, including some of the finalists for a few of the categories. Then, after all of these stories, this book explains the Damon Knight Memorial Grand Master Award and the Rhysling Awards. Each of these explanations is followed by material about or from the winners, or both, in the case of Gene Wolfe, the winner of the Damon Knight Memorial Grand Master Award.

In this anthology, I read well-written stories that just were not that readable. I fully acknowledge that I am bit of a knuckle dragger, but most of the stories had little or no popular appeal, much like many of the well-made but unwatchable movies that win Academy Awards. Looking at the lists of past winners, I saw plenty of really popular books that had widespread appeal. I feel like the 2014 winners were chosen as much for their writing skills as they were for the stories that actually won. The two standouts for me were the winner of the Best Novelette “Close Encounters” by Andy Duncan and the Best Short Finalist “The Bookmaking Habits of Select Species” by Ken Liu, with the instruction on “How to Read Gene Wolfe” by Neil Gaiman receiving an honorable mention from me.

The anthology has some really high-quality stories, and several of them can strike major cords with many readers, but sometimes I really felt like I was adrift in some of the authors’ superior intellects (these folks are graduate-level smart) rather than racing through the stars to the distant lands I was hoping I would be sent to. I could not find any fault with the winning selections or the talented people who wrote them, but a majority of this collection, while intriguing, thoughtful, and well-written, was just beyond enjoyable reading.