Skip to content
Home / Delve into the Depths in the Kobold Blog / Out of the Frying Pan: The Kronhorn’s Forgotten Friary 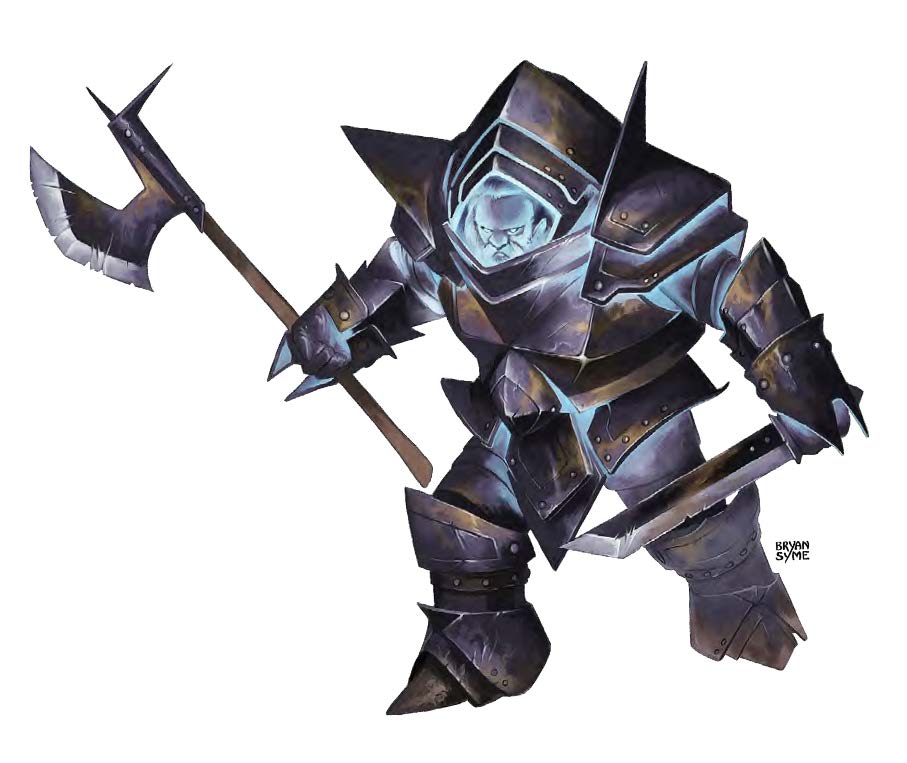 The canton of Vursalis is a jagged and towering land, surrounded by cloud and glacier and permeated by an uncanny sense of primordial power and deeds long forgotten. Winter travel among the western Ironcrags is rarely advisable, attempting the mountain passes even less so. But promises of risk and renown, gold and gain, rarely fail to inspire willingness and resolve among the daring or desperate, regardless of season.

Having followed the alpine sled routes from Bundhausen, you’re finally ascending the saddleback pass adjoining the Kronhorn and Mount Mergansar. Tired, freezing, and dehydrated, you press on, knowing that to finish this final, frigid haul upward means dry clothes, supplies, and hot food at the Mule’s Rest, a way station and trading post perched atop the pass. The establishment offers safe haven to travelers before beginning the final, winding descent into the Peshvai glacial rift and on toward the dwarf citadel of Vursalis.

Summiting the snow-mantled pass, you see the trading post, a solidly built log structure layered in hides, pelts, and antlers, but something’s wrong. The mule paddock and nearby campsites appear empty. And you realize you’ve smelled no cookfires during your approach, heard no mules braying or shouts of greeting or challenge. There’s no movement and no sound other than the soft creak and thump of the trading post door, swinging in the bitter wind.

Developments. PCs approaching the paddock realize first how wrong things are. The corral looks like a slaughterhouse: blood-spattered snow, gobbets of un-skinned meat, and the occasional hoof are what remain of the mules, ponies, and goats. A successful DC15 Wisdom (Survival) check reveals that the butchery occurred recently (within hours) and that the carcasses were carried away, northwest up the forested mountainside. A successful DC 17 Intelligence (Nature) check identifies yeti tracks among the bloody confusion.

Searching the campground reveals four mountain dwarf corpses, prospectors and trappers, frozen in their beds. A successful DC 16 Intelligence (Medicine) check indicates death by starvation at least 18 hours ago. The emaciated campers are now four quiet souls (see Creature Codex) who attack once any remains are investigated. They’re joined by four frostveil (see Tome of Beasts), lingering nearby. Attracted earlier by the slaughter of the draft animals, the frostveil move sporadically (1d4+1 × 10 feet/round) in the gusty, mountain winds.

Investigating the trading post reveals no signs of forced entry, violence, or foul play. The interior is also undisturbed, the cashbox, valuable pelts, supplies, and ore samples all untouched. A DC 16 Intelligence (Investigation) check reveals the proprietor and family were either carried or walked from their beds into the snowy night, roughly a day ago. A successful DC 17 Intelligence (History) check recalls (or locates) evidence of a secluded dwarf monastery nearby. Perhaps the family fled there? Outside the rear of the structure, a successful DC 14 Wisdom (Survival) check picks up the missing dwarves’ barefoot trail also heading northwest, up the Kronhorn. 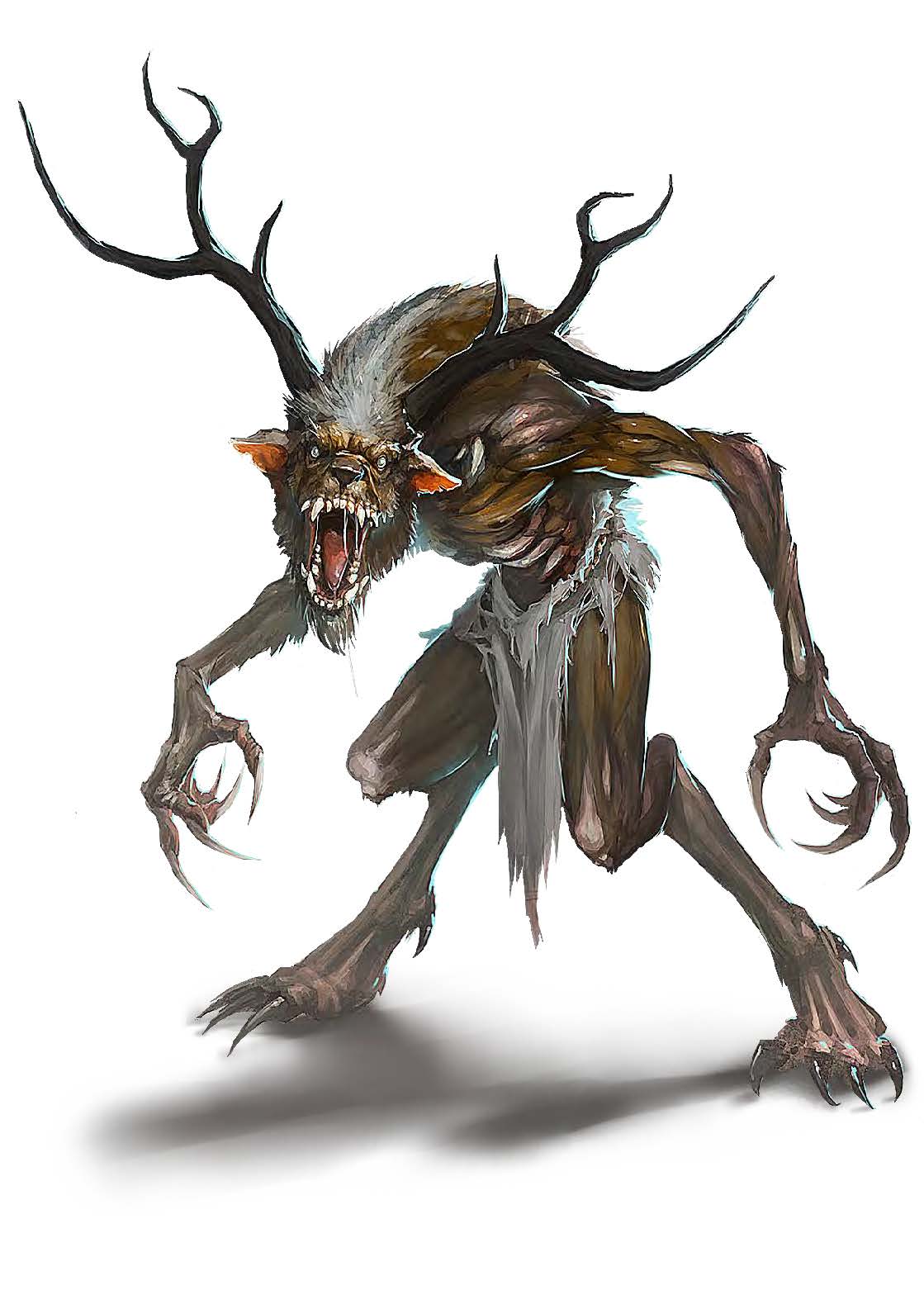 Despite fading daylight and mounting snowfall, PCs have little trouble tracking their quarry up the mountain. The chaotic and bloody trail converges with the older tracks of the dwarves. Three abominable yetis and their stolen carcasses, delayed by their earlier rapaciousness at the paddock, are now losing daylight. They expect no pursuit. Gorged, they begin bedding down. PCs are forewarned by the barking and squabbling of the unwary monsters and easily (GM’s discretion) approach undetected from downslope. Characters realize they must go closely around or through the monsters before regaining the swiftly disappearing trail.

Developments. PCs attempting to normally bypass the yetis use individual stealth checks (DC 15) made at disadvantage due to snowy, forested inclines and declining visibility. This disadvantage also affects melee attack rolls made against uphill targets. If alerted, the yetis attack, fighting until dead. If combat ensues, adversaries farther up the mountainside are warned by the howling; Friar Eldicar (see below) then teleports a wendigo (see Creature Codex) to the vicinity. The wendigo arrives 3d4 rounds after combat begins, attacking or, if necessary, stalking and later ambushing PCs.

“Yes, onward and upward bold heroes. Draw near and pay homage to the First Lords of the Kronhorn. You’re welcome as witnesses to our resurrection and to the eradication of all trace of the line of Vursalis from the face of Midgard.” 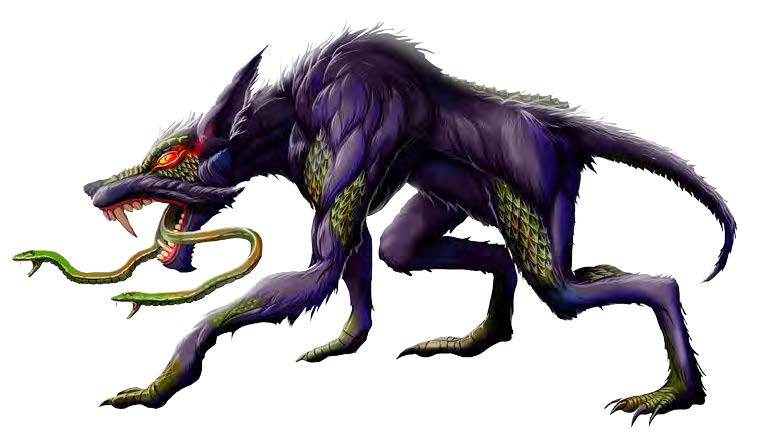 Developments. The monstrous trio attacks. If both ghost dwarves are destroyed, the son of Fenris tries “bargaining” (stalling) with PCs until Eldicar’s ritual nears completion. Successful DC 17 Wisdom (Insight) checks see through this tactic, revealing to PCs their adversaries’ timetable concerns. PCs have 3 minutes to reach the friary and engage the friar, interrupting the ceremony. Otherwise the dwarves perish and a second son of Fenris is conjured from somewhere beneath the monastery.

Eldicar performs the ritual alongside another wendigo. Its unique powers hastening the sacrificial “death by frost and famine” required for Eldicar to siphon off the dwarves’ lifeforce, transferring it into the quickly coalescing form of another son of Fenris. PCs disrupt the ritual with any successful attack roll against Eldicar at which point both he and wendigo attack.

Triumphant PCs questioning survivors, magically divining, or otherwise investigating the evidence and ceremonial site can (GM’s discretion) unearth clues (such as Eldicar’s or other monks’ journals), eventually piecing together the following.

Friar Eldicar was intrigued and seduced by the esoteric texts and forbidden histories of the old “mountain gods.” Feral gods of plague, frost, and famine—cast down eons ago—whose dark legacy his monastic order was established to safeguard and hide away. For years, Eldicar secretly delved into the sealed scriptoriums and forgotten vaults beneath the friary. What he awakened in those dark depths and within himself would soon spell madness and murder, cannibalism and undeath, for his brother monks and perhaps the whole of Vursalis.