Skip to content
Home / Delve into the Depths in the Kobold Blog / Harrowing Haunts: A History of Haunts 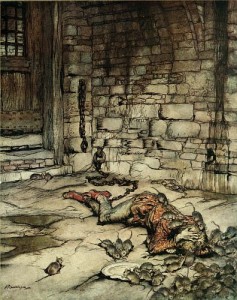 A History of Haunts follows the career of Otto Geist from relatively unknown trapsmith to the leading authority on haunt manifestation.

Today was a glorious day! I encountered my very first haunt, and even though the bleeding walls and faint sobbing were somewhat disturbing—I am not ashamed to admit that I fled Lord Cauton’s wine cellar with utmost haste—I could see beyond the blood and dread. I’ve seen the future of trapsmithing. If a haunt can catch me unaware, then thieves won’t stand a chance.

I’ve completed my research on haunts. There are some documented cases that provide hints on how the are created, but apparently, I am the only one that wants to create a haunt on purpose. When I suggested it to Maester Welhant as something I have an interest in, he abruptly ended our meeting and informed me that he couldn’t help me further. I think the way forward is to engage in practical experimentation…

We have found a deserted farm and claimed it as our base of operations. I have claimed the farmhouse as my laboratory, and the old barn has been turned into a makeshift holding pen. The men grumble about not having a roof over their heads, but that is why they brought tents. I have high hopes that our search for research specimens will soon yield results. An old trapper informed me that goblins frequent the nearby woods.

This experiment has been a complete and utter failure. It just cannot be done, it seems. I’ve done things to these goblins. Wicked, terrible, some would say evil things. I’ve brought pain, despair, suffering, and still… nothing. All that effort, all for naught. Not a single manifestation. There are several documented cases where only a single death was required to trigger a haunt. One death! I’ve killed dozens of goblins and nothing. I am beginning to suspect that goblins were a terrible choice in source material.

A depilated farmhouse stands alone on a low hill. An old barn stands nearby. A Knowledge (engineering) or Profession (carpenter) (DC 13) check reveals that the barn was remodelled into a makeshift prison.

XP 800
CE haunt (10-ft.-by-20-ft. area)
Caster Level 3th
Notice Perception DC 20 (to hear the creaking of wood, the shuffling of many feet, and in Goblin: “Not me, not me,” a sentence that is repeated again and again)
hp 10; Weakness slow (manifest at initiative rank 0); Trigger proximity; Reset 1 day;
Effect When this haunt is triggered, the affected area is filled with the stench of excrement, sweat and palpable fear. All creatures in the area of effect are targeted by the crushing despair spell (DC 16).
Destruction Burning down the barn and consecrating the area destroys the haunt.


The farmhouse is abandoned. A steep staircase leads down to the cellar, and a stuck, simple wooden door at the bottom of the staircase bars further progress. It requires a break check (DC 13) to open. Once the door is opened, it reveals a dark cellar with a low roof. On the far wall, a set of manacles dangles limply. The area near the manacles is deeply stained; a Heal check (DC 13) reveals that blood caused the stains. Entering the cellar is quite safe, leaving it triggers the frustrating failure haunt.

XP 1,600
CE haunt (10-ft.-by-15-ft. area)
Caster Level 5th
Notice Perception DC 15 (to hear a litany of curses)
hp 10; Trigger proximity; Reset 1 hour;
Effect When this haunt is triggered, the manacles attached to the wall levitate into the air. Dust swirls around the manacles, forming a Small twisting form. The creature leaving the cellar is affected by a confusion spell (DC 16).
Destruction The haunt can be destroyed by removing the manacles from the wall and melting them down. The cellar’s stains need to be washed away with holy water.

9 thoughts on “Harrowing Haunts: A History of Haunts”