Skip to content
Home / Delve into the Depths in the Kobold Blog / Old Hat Monsters: You Spilled My Beer! 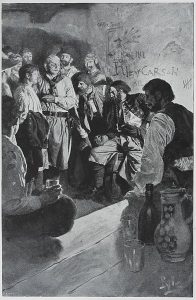 Last time we went crusty with the old guy/creature that would kick your butt based on defensive abilities. I was satisfied with this until a commenter pointed out he was hoping to see an old guy that punches you in just the right spot to crumple you. The more I thought about it, the more I wanted that character to come to life.

I thought about doing another age-before-beauty-based template to reflect that, but a little voice in my head told me that wasn’t the answer. I came to realize my crusty template was about more than my stern belief that you never want to arm wrestle with an old guy—it was about a favorite trope of mine that has fallen out of favor at my table: the bar fight.

Aside from the fact that few characters have optimized or are super familiar with unarmed combat, there’s the lack of excitement in the bar fight because it can be hard to challenge PCs in a combat when it’s usually just a bunch of expert types in a bar. In an effort to change that, I’m going to share some concepts for bar fighters you might want to see. The crunch comes with the comments, so join me after the jump for some exciting bar fighters.

Kelgrym is a dwarf monk and cleric of Gozreh on shore leave. This was his favorite port because he had a sweetie he’d see regularly, but he stopped by only to find that she had found herself another dwarf and they had moved away. At this point, he is drunk and somewhat volatile—looking for a fight. He has the Hard-headed feat and tends to grapple then use flurry of blows with his hard head in combat. Escalating things, he has the Growth domain and can become size Large as a swift action. His access to the Wind domain allows him to use a bull rush attempt on anyone in a 30-ft. line.

Rendar is an orc with fighter and sorcerer levels who feels out of place in his gang. The group is a mixed bunch of orcs and half-orcs, most of whom fear Rendar because Rendar constantly starts fights to prove himself. The orc and half-orcs are warriors with the Brutal Grappler teamwork feat, while Rendar is a fighter who uses his sorcerer levels to boost his prowess, favoring stone fists in a brawl. The gang recently plundered a caravan about 10 miles out and are celebrating in a shady tavern. Rendar will open combat with a dazzling display to aid his comrades.

Wendal Swiftfoot is a halfling bard with a penchant for causing chaotic brawls. He uses his Small size, allotment of spells, and some well-chosen feats (such as Throw Anything) to instigate fights, then stays underfoot and steals valuables.

Who do you want to see first? Every three votes for a brawler gets you the stat lines in the comments via link to a Google doc. Follow me on Twitter @GM_Solspiral.

7 thoughts on “Old Hat Monsters: You Spilled My Beer!”