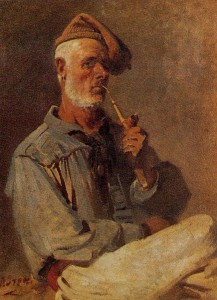 In Pathfinder, aging is addressed in game mechanics by a slow degradation of the physical attributes and an equally slow gain in mental attributes. I agree that for perhaps the majority of stories this makes perfect sense, but then I think of some of my favorite characters that are older and how they seem to overcome age and defy this. Marv from Sin City, Bruenar Battlehammer from R.A. Salvatore’s work, Flint Fireforge from Dragonlance, and pretty much every veteran sailor from any ship-based fiction.

Then there’s Randy Couture vs. Tim Silva. If you know MMA, you know my point. If not, allow me to paint you a picture. Tim Silva was the UFC heavyweight champ, 30 years old, 6-ft. 9-in., and pretty much on paper the heavy favorite. Randy Couture was 43, had retired and come back, was under 6-ft. and weighed about 80 lbs. less than Tim Silva when they fought. Randy nearly ended the fight in the first minute with a hard right. For five rounds, the smaller, lighter, older man bullied and dominated the larger younger man with a 10-in. reach advantage.

Folklore monsters tend to be long-lived creatures that gain something with time. Join me after the jump for a template that honors a counterintuitive literary tradition: Sometimes the most dangerous man in the bar isn’t the huge muscled guy—it’s the old crusty sailor with the tattoos.

This is an acquired template that can be applied only to humanoids, animals, vermin, and magical beasts. Outsiders and undead need not apply.

Armor Class: Gain a +2 to natural AC from scarification and bone density.

Stubborn as Hell (Ex)—Those with the crusty template are hardier and more set in their ways then their more youthful peers and gain a +2 to CMD, Will, and Fortitude saves.

Tough as Nails (Su)—Treat this as orcish ferocity, meaning the crusty creature can act in a round that would normally knock them out.

Liquid Courage (Ex)—When intoxicated, the crusty creature gains the benefits of a rage spell in place of the normal effects of intoxication.

Ability Adjustments: The crusty template replaces normal aging and allows the reverse to happen—they gain physical stats as their mental stats degrade and they do so at the same rate as normal aging.

For every three comments, I’ll provide some crunch on this. What do you want to see? A crusty old sailor? A crusty wolf or perhaps a crusty Armovoraxx? You know the drill. Follow me on Twitter @GM_Solspiral for the latest on Old Hat Monsters, The Winding Road, and The Flying Pincushion.