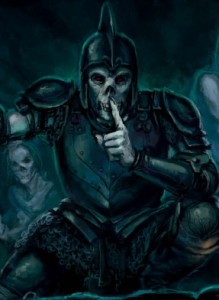 Advanced Races 2 : Darakhul gives Pathfinder RPG players everything they need to play as a ghoul of the Dread and Endless Imperium. Having chosen the Emperor of the Ghouls as my first Midgard Icon compatible with 13th Age, I couldn’t resist converting the darakhul to the ARCHMAGE Engine as an optional PC race.

Each race in 13th Age has one cool racial power. High elves can teleport in combat. Dwarves can take punishing damage and come back for more. Gnomes mess with your mind. You could easily take that approach with the darakhul — for example, by giving a PC an unarmed attack that renders a target vulnerable on a natural even hit.

But there’s a lot more to the darakhul that makes them so compelling — and such a threat to their neighbors. Take darkvision, for example: can you picture a soldier of the Ghoul Imperium groping her way down an underground tunnel, or cursing because her torch went out? And if ordered to retrieve a magic sword from the bottom of a lake, wouldn’t a darakhul simply load his pockets with rocks and walk in, since undead don’t have to breathe?

So I brought over several darakhul racial abilities from the Pathfinder-compatible version, and tried to balance them out with significant disadvantages. Would you use this PC race in your campaign? How would you tweak it? Let me know in the comments!

+2 Charisma, No Constitution: Use your Charisma score in place of your Constitution score when calculating hit points, AC, PD, Constitution-related checks, and any talent or other ability that relies on Constitution. When generating a darakhul character using a point buy system, you must still spend sufficient points for a Constitution score of 10.

Ghoul of the Imperium (Racial Power)
Being a ghoul has its benefits—and its disadvantages.

Undead: You do not breathe, sleep or get tired. You are resistant to negative energy and poison (16+). Healing spells and potions do not affect you. You are vulnerable to holy attacks, and are affected by spells, attacks, abilities, talents and powers that target undead. If you are reduced to 0 hit points or less you are immediately destroyed (no death saves). You cannot be returned to life/undeath by anything that raises or reincarnates the dead. Resurrection returns you to life as your original race—not as a darakhul.

Darkvision: You can see in the dark as well as a normal human can in full daylight.

Daylight weakness: You suffer a -4 penalty to attacks, skill and ability checks when in full daylight.

Champion Feat: With practice, you’ve learned to better handle the effects of the sun. You reduce the penalty from being in the sunlight from -4 to -2.

Hunger for flesh: You are always hungry—hunger defines your very existence. When you are around living creatures it takes iron discipline to keep from killing and eating them. To heal during a quick rest, you must consume a small meal of raw meat. To take a full heal-up, you must spend one hour consuming an amount of raw meat equal in volume to a small creature. (Such as a gnome, which we hear is delicious with a little hot sauce.)

Champion Feat: You can take a recovery when your lethal bite attack staggers another creature or reduces it to 0 hit points.

Lethal bite: Your heavy jaw is powerful enough to crush bones to powder. When making an unarmed attack you deal 1d8 damage per level plus your Strength modifier. On a miss you deal damage equal to your level.

Adventurer Feat: On a natural 16+ hit with lethal bite your target is vulnerable to attacks by undead until the end of your next turn.

Champion Feat: On a natural even lethal bite attack roll against a vulnerable target, the target becomes stunned (save ends).

Epic Feat: Once per day as an immediate free action after making a lethal bite attack you gain a level-appropriate fear aura that lasts for the rest of the battle.

They call themselves the People, but the rest of Midgard calls them the Lords Subterranean, the Ghoul Imperium, or simply the Empire of the Ghouls. Their cities lie out of sight, their agents infiltrate the underworlds of a score of surface cities, and their goals know no limits. To them, if you are not a member of the People, you are food. They are the darakhul.

By definition, both ordinary ghouls and darakhul arise from the infected and fallen of other races, but darakhul PCs start play as lesser darakhul. Any bonuses, penalties, and abilities of the previous race are gone; only their cosmetic features remain. Over time these pointed ears, long beards, or similar features fade into the bald, fanged features and pale, grey skin of the ghoul races.