Skip to content
Home / Delve into the Depths in the Kobold Blog / Oh, I’m Going to Get Killed Any Minute Now (Part 2) 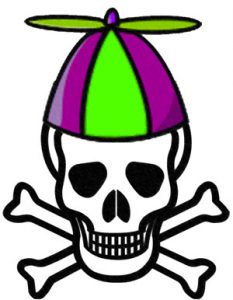 Previously… (Seriously. Check out the previously if you missed it!)

New unintelligent undead arrived today. More accurately, the bodies of the attacking dwarven warriors have been re-animated to act as guards, and so has Sigvald.

New arrivals are total jerks; at Jimbo’s suggestion, am trying to figure out how to sneak up on them and put silly hats on their heads while they are not paying attention. Limited success, limited access to silly hats.

Weekend vacation canceled due to adventurers. Hid in my strategically important water-filled hole while the dwarf skeletons and the reanimated Sigvald fought the intruders; pretended to be a semi-sentient toxic mold. Have perfected a pretty darn good impression, according to Jimbo. The trick is to make bloop-blurgle sounds and occasionally say things like ‘I am very toxic’; am told that I am quite convincing.

Impression has not been field-tested against actual adventurers; group of humans walked past the door to my room without bothering to look for me.

NOTE: Have taken precaution of writing ‘Warning: Cursed Fountain’ over the fountain and ‘Caution: Haunted Door’ above the doorway to deter entry.

Decided to take the day off, adventurers or no. Aforementioned adventurers currently camping right outside my door, tending to wounds inflicted by Neil and his co-workers on level 2.

Trying to be very quiet. Poker night canceled; now reading a heavily annotated copy of “Menfolk are from the North, on the Ninvellir, standing upon the dwelling place of Sindri’s kin, they who are adorned in gold; Womenfolk should ever remain by the Hearth,” apparently a book of dwarven relationship advice, which I found on the floor covered in reanimated dwarf gunk.

Have decided to grow a beard.

Adventurers left this morning to investigate down to level 3; have been hearing a lot of screaming and commotion coming from below all day. Very annoying.

Redecorating strategically important fountain and theoretically important fountain room to make them more ominous and therefore impractical to investigate. Jimbo has assisted me in adding layers of evil-looking symbols and junk to the wall. After much deliberation, we raided the room formerly belonging to Sigvald for candles and skulls and furs and things.

Having seen it, now strongly considering moving into Sigvald’s old place: very nice acoustics, good Feng Shui, a lovely secret door leading to a crawlspace that leads into the adjoining haunted woods next to the dungeon, excellent carpeting, good-sized closets. Unfortunately, a bit too conspicuous.

Huge main door, covered in skulls. I mean, you just walk into the first level of the dungeon, and you’re like “Oh, man, I bet the mini-boss is in there. Also: treasure.”

Quietly knifed the already injured wizard who was on watch; then calmly slit the throats of all the others in sequence. Now have a spellbook and am strongly considering becoming a mage.

Jimbo has volunteered to be my familiar.

Will be updating further at later date; currently learning to cast spells. Magic not as hard as everyone makes it out to be, apparently.

About the Author
Clinton J. Boomer, known to his friends as ‘Booms,’ resides in the quaint, leafy, idyllic paradise of Macomb, Illinois. He began writing before the time of his own recollection, predominantly dictating stories to his ever-patient mother about fire-monsters and ice-monsters throwing children into garbage cans. He began gaming with the 1993 release ofPlanescape, which shaped his junior high years, and he was first published professionally in the ENnie Award-winning Pathfinder Chronicles Campaign Setting from Paizo Publishing after placing in the Final Four of Paizo’s inaugural RPG Superstar! Competition. He currently devotes a full 99.9% of his waking hours to thinking about fantasy adventure in general or ninjas, more specifically. Boomer is a writer, filmmaker, gamer, and bartender; his short comedic films, the “D&D PHB PSAs,” have over 4,000 subscribers on YouTube and and have been viewed nearly a million and a half times. His debut novel The Hole Behind Midnight was released in 2011; Daniel O’Brien, columnist for Cracked.com and contributor to the New York Times bestseller You Might Be a Zombie and Other Bad News called it “ … Raymond Chandler meets Douglas Adams by way of a fantasy nerd’s fever dream. And it’s AWESOME.” Boomer is currently the happiest he has ever been in his whole life.