Skip to content
Home / Delve into the Depths in the Kobold Blog / Of Godly Might: Clerics of Loki (Part 2) 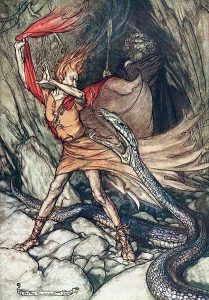 There is a certain sect of bards that thrive on mischief-making rather than on music, and they refer to themselves as ruse-weavers.

Mayhem, mischief, and misdirection are the tools of the trade for a ruse-weaver.

Bardic Performance: A ruse-weaver does not gain the bardic performance ability or any of its performance types.

Loquacious Linguist: At 1st level, a ruse-weaver uses his Charisma or Intelligence modifier (whichever is higher) to determine how many bonus languages he gains. Additionally, a ruse-weaver gains two languages whenever he invests a rank in the Linguistics skill.

Misdirection (Su): “Confusion is key” is the motto of every ruse-weaver. At 1st level, as a swift action, a ruse-weaver can call upon the power of misdirection to grant himself concealment (20% miss chance), as well as the ability to use the Bluff skill to feint in combat. Making a feint check in this manner does not require any additional actions. If the feint check is successful, the ruse-weaver’s opponent loses their Dexterity bonus to AC against all attacks the ruse-weaver makes in the round in which the check was made. A ruse-weaver can use this ability for a total number of rounds per day equal to 4 + his Charisma modifier. Maintaining this ability is a free action, but it ends immediately if the ruse-weaver is killed, paralyzed, stunned, knocked unconscious, or otherwise prevented from taking a free action to maintain it each round. At levels five, eleven, and seventeen, the concealment increases by 5%, to a maximum of 35% at 17th level.

Slippery Tinkerer: A ruse-weaver becomes especially adept at verbal and physical manipulation. At 2nd level, a ruse-weaver chooses two skills from among Bluff, Disable Device, Escape Artist, and Use Magic Device. Once made, this choice is permanent, and can not be changed. Henceforth, the ruse-weaver adds 1/2 his level to the selected skill checks. This ability replaces versatile performance and well-versed.

Mischief Maker (Su): At 3rd level, as a move action, that does not provoke an attack of opportunity, a ruse-weaver can add the effect of a confusion spell (see Pathfinder Roleplaying Game Core Rulebook) to his melee or ranged weapon attack (this ability can not be used in conjunction with a melee or ranged touch attack from a spell or spell-like ability). If the attack hits, the target must make a successful Will save or suffer the consequences of the confusion effect for 1 round. If the weapon attack is unsuccessful, that use of the mischief maker ability is wasted with no effect. This ability can be used once per day at 3rd level, and an additional time at levels eight, thirteen, and eighteen, to a maximum of four times per day at 18th level.

Disrupting Diatribe (Su): At 9th level, as an immediate action, a ruse-weaver can attempt a disrupting diatribe when an opponent begins to cast a spell. Spells initiated with a swift or immediate action are not affected by this ability. Spell-like, supernatural, and extraordinary abilities (including all witch hexes) are also not affected by disrupting diatribe. The opponent must make a successful Will save (DC 10 + the level of the spell being cast + the ruse-weaver’s Charisma modifier), or lose the spell. A ruse-weaver can use this ability once per day at 9th level, and one additional time per day at 19th level.

Deceiving Duplicate (Sp): At 10th level, once per day, a ruse-weaver can create multiple images of himself as the spell mirror image with a standard action. At 15th level, a ruse-weaver can activate the deceiving duplicate ability as an immediate action, and can use it a total of two times per day. At 20th level, a ruse-weaver becomes a master deceiver, and gains a number of mirror images equal to his Charisma modifier OR the d4 images specified in the spell description (whichever is greater) plus one image per three caster levels, with no maximum. A ruse-weaver can use this ability a total of three times per day at 20th level. This ability replaces jack-of-all-trades.