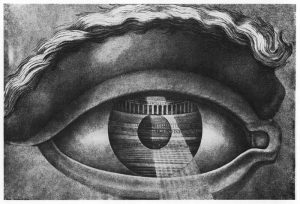 Oblivion’s Eye hovers before you—throbbing, unblinking. The massive, unwholesome eyeball — 5 ft. in diameter — is marked by a violet iris, mixed with orange patterns like radiating flames.

Called forth by terrible cults on moonless nights, Oblivion’s Eye is regarded as the herald of annihilation. Precious and unique items are brought before it to be sacrificed to oblivion. The cults make living sacrifices annually, and each must be a singular individual—the best, the brightest, the most beautiful person of their sort in the land. Master craftsmen and talented vocalists renowned for their ethereal voices are sought out as such sacrifices.

After accepting these sacrifices, the eye wanders the night, destroying all that its baleful gaze falls upon… until the dawn comes or it is destroyed…

SPECIAL ABILITIES
Aura of Corruption (Su) All natural animals immediately flee when within 30 ft. of Oblivion’s Eye, and any creature that remains in its presence at the end of a round takes damage. Those ending their turn within 10 ft. of the eye suffer 1d6 damage; those 11–20 ft. suffer 1d3 damage; and those 21–30 ft. suffer 1 damage. Even if a living creature leaves the unnatural aura, they suffer 1 bleed damage unless treated — toxic exposure to the eye rots the afflicted creature from within. Undead, constructs, and unattended objects suffer all but the bleed damage. This damage bypasses energy resistance, damage reduction, and hardness. The eye can slowly bore through stone using just this aura.

Cry from Beyond (Su) As a standard action, Oblivion’s Eye can pulse unnaturally, its entire surface thrumming and vibrating sickeningly, producing an effect as per the shout spell (CL 8th).

Gaze of Dissolution (Su) As a standard action, the eye’s dark pupil can bulge inward and rupture, unleashing a cold wind carrying tiny black motes of darkness that swarm like insects. This affects a single target within 60 ft. as a disintegrate spell (CL 8). The swarming black motes tear at the target before being re-absorbed, healing it for 4d6 hp damage at the end of the round. Once it has used this attack, it must wait 1d4 rounds before it can repeat it.

Partial Incorporeality (Su) Oblivion’s Eye is not made of earthly material and is treated as partially incorporeal, so any physical attack has a 20% chance of failing. Affects that fail to penetrate this unearthly defense do not pass through the creature so much as shudder around it, avoiding contact with its form or even splashing harmlessly off of it as if striking liquid, reforming after failing to injure it. Certain energy effects—force, fire, electricity, and cold—bypass this partial incorporeality and affect the creature normally; acid does not.

As a manifestation of entropy, Oblivion’s Eye is fearless. It moves inexorably toward any interesting thing it sees until close enough to destroy it with its gaze of dissolution.

While Oblivion’s Eye lacks wings, its unnatural presence alone makes the material world recoil, and the shuddering air disturbed by its passage stirs up a cloud of debris as described under the Hover feat as if it had wings.