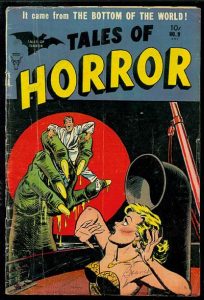 The gruesome, the ghastly, the horrific, the sick. How often have we come across monsters, traps, or adventure scenes and wondered just how morbidly dreadful they are? Sure, I’m both drawn and repelled by it, but how much? Is it more grisly than the last book I read? Less so than the last guest I invited over? Or the last time I ate? Is there some standard by which we may measure all things grotesque and macabre?

As I sit here, typing away—pausing occasionally to caress the severed hand on my desk—I ask myself, how can we gauge the level of morbid dreadfulness that we read about in quality RPG adventures or feel surging through our hopelessly depraved hearts?

At such moments, my mind turns to the works of that master of the macabre, Richard Pett. I’d like to call to mind some of his most inspiring adventures. In The Styes (Dungeon #121), Pett described the watery boardwalk city thus: “Under smoke-bent gables, palsied carcasses of houses lean against each other—languid, broken, awaiting the peace of collapse.” Of Mr. Dory he wrote, “Rumors abound that he has a skin condition—in fact, his condition arose after he died many years ago…” The adventure that followed was one of his best…

Or maybe, “At the mound’s apex squats a flat-topped altar stone, with towering barren trees… their leafless branches twisted and groping toward the ceiling above as if in search for a sun’s warmth they shall never feel.” Your brother’s bedroom? No, it’s just the Sunless Grove from Pett’s Carrion Hill module from Paizo. Since his work has been so definitive when it comes to ghastly RPG adventure, I salute Mr. Pett by naming this scale after him. May it live on in the twisted hearts and minds of us all!

The Pett Scale
The Pett Scale is a 6-point calibration with 1 point being the most basic of creepiness and 6 points being the most disturbing. Gentle reader, you may well be thinking, “Why 6? Why not 5—as in 5-star films—or the oft used scale of 10?”

Well, if you must ask, you must consider that a 6-point scale has long been neglected…

After all, six is the number of sides found on the most common RPG die: the d6. Yet we do not honor the number six. Well no more! This scale gives the number six its rightful place of honor. Six is different. Six is arbitrary. Six is the number of legs on a cockroach. Six is not quite the Seven Deadly Sins but more than the Four Riders of the Apocalypse. Six is the number of dwarves you would have if one of them had been strangled in his sleep. Six is creepy. Six smells a little funny. Six has some deep, personal problems that will haunt it forever.

Now follows the scale along with examples at each level to give a feel for flavor. This is by no means a complete list, merely a brief wellspring of calibration. I invite you all to share more examples in the comments section!

15 thoughts on “The Pett Scale”