Skip to content
Home / Delve into the Depths in the Kobold Blog / My First Gen Con: Stan! 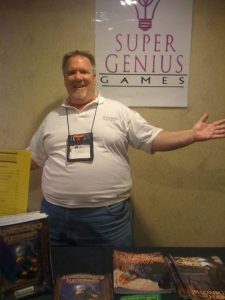 It’s the big week! Gen Con! Gamers from all over the world are flying, driving, busing, tunneling and teleporting  to Indianapolis! With all these exclamation points, it’s fitting that Stan! should share his memory of his first Gen Con…

Weird as it may seem, I don’t remember my first Gen Con, or my second… or really ANY of them individually. I just remember GEN CON, as though it is a place beyond space and time—an extra-dimensional location that I inhabit for 4 days every year, and each visit simply builds on the previous ones…

Certainly, I can tell you that my first time to the show was in 1995 in Milwaukee as a staffer for West End Games. I also know that the next seven years in a row, in both Milwaukee and then Indianapolis, I attended as a member of the TSR or Wizards of the Coast staff. The years after that I was there as a Game Mechanic, working our little corner of the Green Ronin booth, and then as a member of Upper Deck Entertainment. The last few years I’ve been there as a freelancer and helping to spread the word about Super Genius Games. I remember bits of things that happened at EVERY one of those shows, but I don’t think I can separate out which happened in any given year. They all run together.

What I DO remember in vivid detail are the 2 years that I was unable to go to Gen Con. I remember being at home and reading press releases, news articles, and blogs about all the exciting events, new products, and what my friends were doing during and after the exhibit hall hours. I remember the sense of separation, feeling like I’d say or do almost anything if I could just open up the curtain between dimensions and simply be there.

I love going to Gen Con, and I’ve got lots of stories I can share about all the wonderful things I’ve done there. But what I remember most clearly, most vividly, most viscerally… is how much I hate NOT going.

Stan! is a founding member of both The Game Mechanics, Inc. and Super Genius Games. With a background spanning West End Games, TSR, and Wizards of the Coast, Stan! has worked on wide selection of game titles, including Paranoia; the Dragonlance, Ravenloft, and Forgotten Realms settings for D&D; and d20 Modern. You can find him online at 10x10Toon.com and Stannex.com (which remains the Home of All Things Stan!). You can also follow Stan! on Twitter @stannex.