Skip to content
Home / Delve into the Depths in the Kobold Blog / Bilikarr Sparks: A Sample Savant 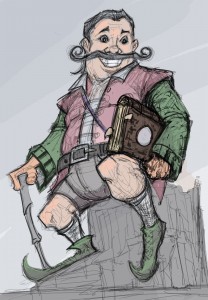 Kobold Quarterly #18 debuted the savant, a generalist base class for the Pathfinder RPG. With the knowledge of the ages and a flair for the dramatic, the savant learns heroics from the tomes he reads and summons avatars of legend with the stories he tells. As a generalist class, it is designed to fill whatever role the party needs. However, it is also a complex class for advanced players. To help visualize the class, meet Bilikarr Sparks, iconic gnome savant.

A portly little man and proud owner of the most spectacularly curled mustache of this generation, the gnome finds glee in rocking his round body while sitting on a stone. He aims his grin your way and asks with a flair for life, “Care for a story?”

Bilikarr Sparks may be a product of his own tall tales. The portly gnome answers simple questions like “where did you come from?” and “why are you here?” with hyperbole, similes, and epic yarns. Instead, he tells of the time a mountain crumbled at his feet because he convinced a cave not to support its oppressive rocky master. He brings up that the first time he picked up a rapier was the day he won the tournament of fencers, basing his unpredictable style on the manner in which his mother stirred gumbo. He regales an especially attentive audience with the fable about how the yrthak found its sonic lance. Some press the issue, particularly reporters, guards, and inquisitors particularly curious why no divine magic or paper trail can narrow down his home country or trace the Sparks lineage. With trademark joie de vive, Bilikarr acknowledges that he could go into such trifling details of his younger days, or he could tell the joke that cost Kibsinney his princedom.

As a savant, Bilikarr Sparks often regales his compatriots and fans with tales of legendary warriors. So potent is his prose, he can summon tangible aspects of these warriors to fight at his side. The following are sample avatars of legend:

Monasteries see dozens of failed monks leave because they could not give themselves fully to the discipline. As a half-elf, Tat Farlang has the advantage of not belonging anywhere and outliving half of his family while maturing far more quickly than the other half. He had the time to dedicate himself fully to his study, becoming the prototypical martial artist.

“Though his tone may be as dark as his brother drow, his heart shone gold as a surface elf.”
—Bilikarr Sparks

It’s an old tale, but a good one. Enolctz Zird was just born the wrong race. Noble, brave, witty, none of the things associated with drow—even frowned upon by the underworldly elves. The legend of Enolctz Zird and his faithful panther friend Ravy’Whneugdn’a is of repeated prejudice, overcoming aversion, and ultimately being a hero in the face of opposition.

“Leave it to a dwarf to turn a knack for magic into a better way to strike with a hammer.”
—Bilikarr Sparks

Were it not for echoes of dwarven baritones bouncing through the mountains, civilization might never have heard of Thora the Hammer Maiden. Always with her nose to the parchment, her clan thought she would waste her natural size and strength. And yet, when challenged to spar or forced to defend the stronghold, Thora could make a hammer she barely touched dominate a battle better than her militant brethren. How aware she was that her warfield mastery directly related to her interests in the arcane, that’s a tale for another day.