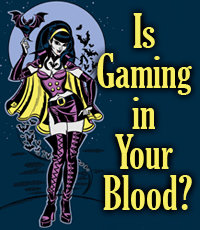 Yark! Gen Con Indy is on the horizon! To celebrate, from now through the end of July we’ll be running a series of guest posts by some well-known people in the games industry, writing on the topic “My First Gen Con.”

But we also want to hear your stories—so we’re running a contest! Send your “My First Gen Con” story in 300 words or less to GenCon@koboldquarterly.com. Whether this upcoming Con is your first or you’re an old hand, tell us all about it. Deadline for entry is July 20, and we’ll announce the winner here on July 30.

The author of the best entry as judged by the Kobold staff will win $100 in credit at the Kobold Quarterly booth at Gen Con Indy 2010 and $50 spending money at the Con! (You must visit our booth at this year’s Con to receive your prizes.)

All entries become the property of Kobold Quarterly, and both the winning entry and some honorable mentions will appear here on the site during the show itself.

Meanwhile, here’s the tale of my first Gen Con…

My own first Gen Con was as a gamer, and it’s the only one I have ever attended purely to play. In some ways, it is still the perfect convention in my memory.

It was 1983 or ’84, and Gen Con was growing fast. My friends and I somehow convinced one of the parents to drive us the 60 or 70 miles up to the University of Wisconsin at Kenosha-Parkside and cut us loose.

Holy cow! Geeks everywhere! Bad hot dogs, lousy pizza, and fantastic gaming. I ran an AD&D slot as a GM and got a surprise: some of the players were a lot older than me—in their twenties! Undaunted, I forged ahead with an Underdark scenario. I got some very encouraging remarks afterwards on the written sheets. (Yes, there was feedback given to GMs on paper. I have no idea who organized that, but it boosted a young GM’s confidence.)

After that, I decided to blow what money I had left—maybe $10 or so—on a trip to the dealer room where the West End Games booth was running demos of a new SF game. I was too shy to ask, but the GM introduced himself. “Hi, I’m Ken. You wanna play Paranoia?”

So I learned about Alpha Complex, the Computer, and the crucial utility of clones. I laughed, and I bought the game, even though they didn’t have boxes for the set yet. The GM signed it for me: Ken Rolston, the game’s designer.

I was high on meeting a geek celebrity, and we played Paranoia that summer a bunch of times. I never did learn the trick of play as light-hearted as Ken’s, but for me, being introduced to the wider gaming world and meeting an actual game designer in person were life-changing. I kept writing and designing and playing, because one day, I figured, I would be the man saying “Hi, I’m Wolfgang. Let me tell you about Midgard!”

10 thoughts on ““My First Gen Con” Series and Contest”