Skip to content
Home / Delve into the Depths in the Kobold Blog / Book Review: The Leopard 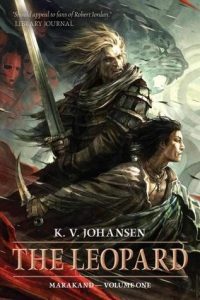 A Novel by K.V. Johansen

To say Ahjvar the assassin leads a rough life is an understatement. You would think that being an assassin was a tough job, but try being an assassin who doesn’t die. Then try being an assassin who can’t die but wants to—not my idea of a good time. Even further, imagine being good enough at killing people that you have a title like Leopard. Ahjvar, the Leopard, is given an offer from the goddess Catairanach. She wants him to kill a prophet known as the Voice of Marakand. If he kills this prophet, his curse will be lifted and he can die like everyone else.

Like all good assassins, Ahjvar has a problem dealing with people—except his trusty sidekick Ghu, who is much more than he seems. Additionally in this book, a Northron wanderer arrives in Marakand with her demon lover and a magical sword on a mission to bring justice to seven devils that played escape from Alcatraz—only they escaped from hell. Confused yet? I was!

The Leopard does just enough right to have gotten it published, but for everything done right there are at least twice as many faults with it. This is my first encounter with K.V. Johansen, and it might very well be my last. The Leopard is actually her second novel, and I can only assume that this novel was picked up based on that first one. Reading The Leopard was like suffering from malaria. I felt delirious, fevered, and disjointed as I read it. The words that were used were great, but they jumped around more than a spider monkey hopped up on Mountain Dew. The moments of lucidity were few and far between, and in the end even an extensive Dramatis Personae couldn’t sort this hot mess out.

The cover art of The Leopard is exactly what it should have been: epic without being overwhelming. Additionally, it really made me want to read this book. The map of the city Marakand was wonderful, but I wish it had been bigger. I would love to see Marakand fully fleshed out as a drop-in city for a tabletop roleplaying game. The map of the surrounding lands was good, but not great. Overall, visually this book looks amazing.

Sadly, that is where the love stopped for me. As someone who reviews books, seldom do I run into a book that I find difficult to finish. The Leopard was one of those books for me. I don’t doubt that Johansen is a skilled writer—she has the bona fides and there were times during the novel where her writing skills really showed themselves, but being a wordsmith is much different than being a good storyteller. The best that I can tell, Johansen has had this story in her head for years. It seemed like she has loved and nurtured it so that it grew to the point where she had to get it on paper. Sadly, from my perspective, she made way too many assumptions about what the reader did or didn’t know, and there was way more story to tell than she had room for.

This book transitions between the past and the future so often that it is hard to keep track of where and when you are. Even when some of the stories of the past are in italics, it is still hard to tell when and where you are. Several characters have multiple names, and with nothing other than the Dramatis Personae to get to know most of them, things got even more confusing. Then a few of the characters were possessed by other beings with strange names, and the hits just keep on coming. I remember one passage where a character was referred to by three different names or titles, and this wasn’t a central character—or was it?

The actual Leopard wasn’t nearly as big of a character as I thought he would be. In fact, as I write this review, I realize he actually got much less focus than 90 percent of the other characters in the book. The Leopard as a character was interesting, but the people around him were even more intriguing. Unfortunately, there were just so many of them! It seemed like each one had two or three names or titles and had much deeper backstories than the reader ever saw or could even comprehend, too. That is one of the reasons why I suspect that Johansen mentally has spent lots and lots of mental real estate on this world.

You can’t build a house without a foundation, and for me this story lacked the solid foundation that it so desperately needed. There is a great story here—the problem is that with no solid foundation, the house could not stand. I don’t doubt that Johansen has something here, but what she needs is an editor who will help her slow down, cut the story into bite-sized pieces, and serve those pieces on a plate that sits on a solid table where a reader can chew on its goodness and digest it properly.

1 thought on “Book Review: The Leopard”