Skip to content
Home / Delve into the Depths in the Kobold Blog / Inspiring Terrains: Alleyways (Part 5 of 5) 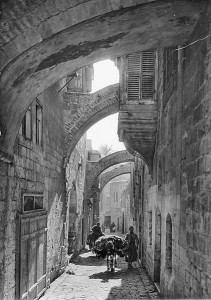 “Inspiring Terrains” looks at encounters—fundamental building blocks that bring together PCs, conflict, and environment. With a little inspiration and a few mechanical bits, it’s easy to make the terrain in an encounter just as memorable as the foes. [Part 1][Part 2][Part 3][Part4]

For the fifth installment, we leave the wilderness to explore a shadowy, refuse-strewn alleyway.

Clandestine meetings with informants, grisly murders by cultists, stealthy urban rangers tailing their marks, thieves casing their next score—scenes set in alleyways figure prominently in urban fantasy. Typically, though, the narrow lane serves only as a convenient hiding place. To enhance an alleyway, think about why the passageway exits, and then, use its essential characteristics to make it an active participant in the encounter…

Alleys live in the space between: “Why is this piece of land not a road?” and “Why is this piece of land not a building?” Think of the stereotypical walled medieval town. Immense effort went into defending some area behind stout fortifications. To make that investment worthwhile, every bit of the land within must serve a useful purpose. Some land bears buildings, some holds roads, but the particular bit bearing the alleyway has neither. Why? Is it a back entrance to a building? Was it supposed to be a building—or was it once a building—but for some reason it was left unoccupied? Is it somehow unsuitable for construction? Answering this question will give the alley a reason to exist. Even better, if the reason the alley exists ties into the motivation for the encounter, the alley will feel like a destination all its own, instead of simply scenery adorning the background.

Face, Meet Wall. Whatever the reason for its existence, alleyways are narrow by their very nature. Although the default choice for 4th Edition is to set encounters in open areas, narrow passages can make a welcome change of pace. Some of the terrain powers given in the underground mine installment of this series would be appropriate in alleyways. Alternatively, the tight confines can make unintentional movement hazardous.

As your foe slides backward to avoid your attack, he does not notice the rough stone behind him—at least not until his cranium collides with the wall.

Watch Out Below! (Single-Use Terrain)

Aboveground Tunnel. With land so scarce within the town walls—and in the absence of modern building codes—houses and shops often got wider as they rose. In extreme cases, the upper stories of buildings which were separated at ground level met at a certain height, forming a ceiling above the alleyway.  The dark shadows cast by the upper stories create a variety of hiding places within the alley, and ambushing monsters and acrobatic characters could even conceal themselves on the underside of the overhangs. Poorly supported and often built shoddily, these pseudo-bridges were prone to collapse onto the cobbles below.

Overhanging buildings create a roof over this alleyway. Pulling on the poorly-mortared blocks and pushing the rotten timbers brings the entire structure crashing down.

Standard Action
Requirement You reach the bottom of a pseudo-bridge spanning an alleyway by climbing, flying, natural reach, or the like
Check Athletics (hard DC) to pull down the building
Success Timbers and stones collapse onto the square below; Acrobatics (medium DC) to avoid being caught in the collapse
Target Each creature in a close burst 4 within the alleyway underneath the collapsed square, including the triggering creature if the Acrobatics check fails
Attack Level + 3 vs. Reflex
Hit 1d10 + 1/2 level damage, and the target is slowed (save ends)
Miss Half damage.
Effect Squares within the burst become difficult terrain

Befouled. Scarce land and the relatively light traffic through alleys make them natural dumping points for refuse, chamber pots, offal, corpses—just about anything the city folk want out of their sight ends up there. Smell, of course, is a more pervasive problem.

Refuse, filth, and nightsoil congeal into a slick, nauseating, quivering puddle. Merely approaching the mass makes your eyes water and your gorge rise.

Move Action
Requirement You must be in a square containing foul, rotting waste
Check Acrobatics (hard DC) to kick or throw the waste at the mouth and eyes of the intended target
Success Disgusting refuse strikes the targeted creature
Target One adjacent creature
Attack Level + 3 vs. Will
Hit 1d8 + 1/2 level poison damage, ongoing 5 poison damage (save ends), and the target is weakened until the end of its next turn
Miss Half damage with no ongoing damage and no weakening

Use this boon to reward a player after a series of encounters in dark alleyways.

As a veteran of the crowded and quickly-changing conditions of life in the city, you have learned to steel yourself against adversity. You rebound quickly when down, you know where to gather rumors, and you have learned how to disappear quickly.

What’s that noise? And the stench! Watch out!