Skip to content
Home / Delve into the Depths in the Kobold Blog / Midgard: the Gnomes of Niemheim 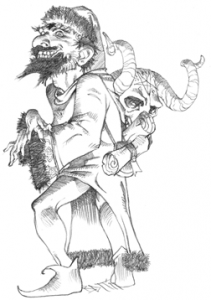 Some creatures of Midgard are gentle, loving, and brave. The gnomes of Niemheim are none of these things. They are servants of Hell.

It was not always so. The gnomes lived among the people of Krakova for many years as friends and allies, teaching humans the arts of fey sorcery, weaving, and gardening. They were a kindly people, always eager to discuss the finer points of pottery, alchemy, tanning, and the illumination of manuscripts. Their hats and noses were sources of mirth, but their wisdom was valued and respected.

Then, 200 years ago, a gnomish prince betrayed a promise made to Baba Yaga. A blood oath of loyalty and service was foresworn. The prince died swiftly, but his people’s suffering was slow.

Ever since, it is said, she has sought to use their beards for her pillow-stuffing. The gnomes lived in fear of night-haunts, strigoi, the ala hags and the psoglav demon-dogs— all servants of Baba Yaga. The gnomes lived in perpetual pants-wetting terror, knowing their children would be grist for Baba Yaga’s mortar, and their villages kindling for her fire and her hunting drakes. Village by village, the gnomes disappeared.

Until one day, a devil of the Eleven Hells made the King of the Gnomes an offer. A generous offer, kind and yet sly…

The devil swore he would hide the gnomes deep in the Krakovan woods in a dozen far-flung villages, and furthermore the demons and devils of the Eleven Hells, the erinyes and barbed and bearded devils in their many varieties would encircle those villages as warden against Baba Yaga. The creatures of Hell would protect the entire gnomish folk—for a small price in blood and souls.

It says much about the terrors that Baba Yaga brought down upon the gnomish folk that they considered this a bargain worth making. In their defense, their only other choice was gradual extinction in Baba Yaga’s stewpots. And so they swore themselves to Hell, and they made the best of it.

Once a month or once a year, the gnomes make blood sacrifices. If no stangers come to their tidy little towns, then they must offer one of their own. Gnomish thugs and illusions and enchanters ply the roads and taverns, amusing travellers. Some of those travelers, it is whispered, follow a kindly gnome to the forest, or hear rumors of wealth and fame. They grow curious about the silent land beneath the pine boughs. Someone always grows curious, when the gnomish bards spin a tale.

Visitors have grown exceedly rare, and indeed few bother the gnomes in their deep piney woods these days. They hold a dozen villages or towns east of Krakova, all well-ordered, with pretty gardens and neat central squares and half-timbered houses. They work hard as tanners of calfskin and hunting leathers. Gnomish wives do weave clever woolens, and the gnomish charcoal burners make the fuel to light the dark nights and the hottest kilns of the Ironcrags. Potters fight each other for bright gnomish glazes, and housewives prize small kitchen knives of Niemheim steel. The gnomes produce suspiciously fine vellum in inordinate quantities, enough to fill the scriptoria of the magocracy. None question their source or methods.

The gnomes still have enemies, but Baba Yaga’s eyes are blinded in their lands. In spring, raiding Krakovan hussars may ride in with a half-drunk Kazzaki scout and steal some sheep. But those hussars and the riotous centaurs who enter into Niemhiem without permission and stay overnight—these armies vanish into the forest. Not long after, a new shipment of fine tallow candles, and finely honed knives, and neatly-repaired tunics is loaded on a dwarven muletrain to Vidim or Morgau, and the gnomes grow a little richer.

‘Tis the way of things, under the dark branches of the forests of Niemheim.

19 thoughts on “Midgard: the Gnomes of Niemheim”