Skip to content
Home / Delve into the Depths in the Kobold Blog / From the Archives: Islands at the Edge of the World 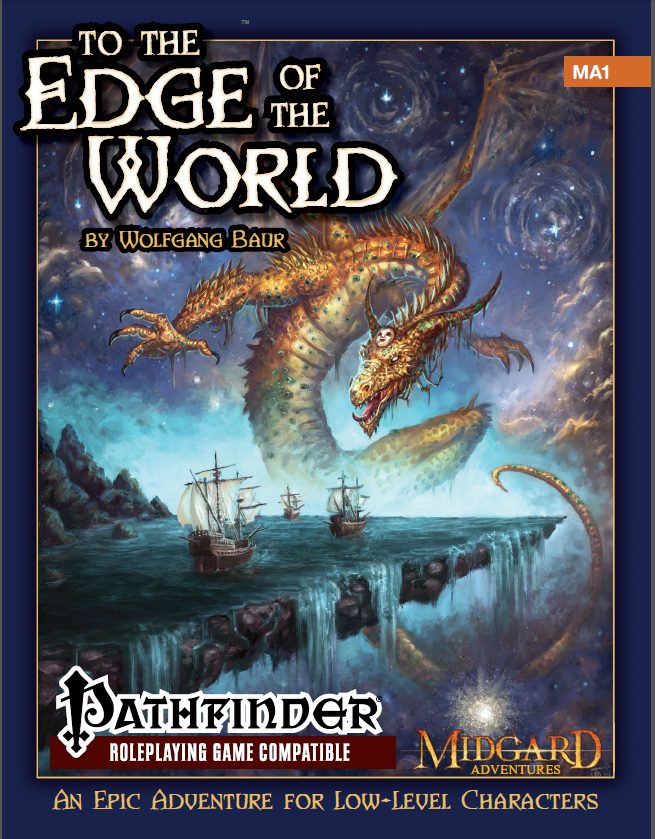 The first adventure I ever bought from Kobold Press was Wolfgang Baur’s brilliant To the Edge of the World. Published in 2012 for the Pathfinder Roleplaying Game, it’s an adventure for 2nd- and 3rd-level PCs, motivated by the Head Kobold’s desire to provide low-level characters with “epic-level fun.” To the Edge of the World is intended to be a break from the narratives that often see beginning adventurers relegated to fighting giant rats, wolves, kobolds, goblins, and other small opponents. Instead, the adventure allows new characters a chance to brush shoulders with powerful forces and experience amazing vistas beyond a goblin cave or a besieged village. To the Edge of the World sees these relatively green PCs sent first to an island run by a dangerous lich queen, next to an actual living island that may submerge at any moment and drown them all, then on a trip right off the edge of the world, and finally the story carts the players up to a citadel in the heavens.

With the caveat that I am delighted and astounded by the wealth of new material the kobolds are bringing us, this is an adventure I’d dearly love to see converted to 5E. However, failing an official conversion, there’s a lot here that would be easy to adapt as is. What’s more, we’re going to look at another Kobold Press offering for Pathfinder, Christina Stiles’s Journeys to the West, and we’ll talk about how the lore in that book can combine with the information in this one for some amazing campaign fodder. 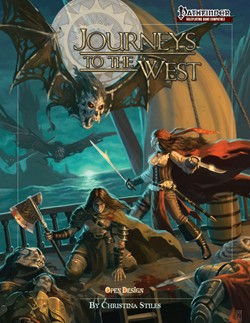 To begin with, To the Edge of the World sees the PCs hired by one Simez Rothgazzi, a “dangerous geomancer and head of House Rothgazzi” who gives them an actual key of Veles, which can open a door in the Tomb of the Minotaur Prince, Qoraz Velesson, wherein lies Rothgazzi’s goal—the Book of Vael Turog, “the book that reads itself.” But the Tomb of the Minotaur Prince is on Karn’lothra, currently the home of a dangerous lich known as the Bloodless Queen. Whether the queen can be bartered with or fooled, the book when found summons a leviathan, specifically the leviathan in the name “Leviathan Island,” an enormous creature swimming through the oceans with a monster-filled jungle on its back. There are plenty of opportunities for adventure on the island itself, but the leviathan will eventually swim off the world’s edge and journey to Star Citadel, a court of elves who live in space. That’s right—elves in Space! How is that for an epic low-level adventure?

Now a campaign which incorporated To the Edge of the World in its early days and then went into Wrath of the River King in its middle and ended up in Courts of the Shadow Fey would make for a wonderful three-part elven court themed arc. True to form, there’s plenty of courtly intrigue and nasty rivalry in Star Citadel, enough characters scheming against each other for personal advancement, that this adventure ties in perfectly with the themes and tones of those other two higher-level offerings. Most of what you’ll need to run it for 5E, mongrelmen and draugr, ghosts and ghouls, wights and liches, are easy enough to find in either official Wizard sources, Kobold offerings, or online homebrews—mongrelmen are now called mongrelfolk and appeared in Curse of Strahd, the “star bearers” alluded to in the final act are the Living Stars found in the Creature Codex, and so on. Plus, as you might imagine, a great many of the encounters in the book are ones where the players would be better served with roleplaying than trying to fight their way through anyway (though there are plenty of opportunities to battle gelatinous cubes, vampiric mists, and other nasty monsters). Anything else that isn’t converted already can be substituted or ignored. So nothing should prevent the eager GM from diving right in.

But to really get the maximum juice out of To the Edge of the World, we need to look at the fantastic lore in Journeys to the West. This Pathfinder book is both a campaign setting and an adventure collection. This tome begins with an overview of Barsella, “the city on the edge of the world,” before going into nearly fifty pages on all the western islands, from the Isle of Morphoi, home to the first of Midgard’s lamias, to the Accursed Isle of Meshong-Lir, to the Burning Shores where the Azer command a fortress in a network of lava tubes, to Terminus Island, which literally hangs off the world’s edge where the oceans pour into the vacuum of the void, and plenty more. The book includes ten monsters and four magic items and ends with five adventures. But for our purposes today, we’ll be looking at the lore surrounding the two islands that feature in To the Edge of the World, Karn’lothra and Leviathan Island.

In the section on Karn’lothra, we learn a lot more about the lich known as the Bloodless Queen. She is a member of a long-vanished race called the Peerage. The Peerage were blessed with “divine ichor” in their veins, but when their attempts to advance themselves drew the ire of their gods, divine servants slew them and banished them to the underworld. The name Karn’lothra translates as “final refuge” in their language, and indeed, the island was the site of their final battle with their gods. There is a vortex in the ocean off the coast of Karn’lothra called Nethus’s Maw, which leads directly to the underworld. The Maw has weakened in (relatively) recent times, and a member of the Peerage known as Ilnora managed to escape. However, in the time after the Peerage’s, the island was colonized by a group of Ankeshelians. Remember them? They are the aboleth worshippers I discussed in my earlier article, “From the Archives: A Deep Dive for Hidden Lore.” Ilnora resurrected their dead, declaring herself their Bloodless Queen and they her Bloodless Court. But it’s not a completely trusting relationship, and they are far from the only inhabitants on the island. Apart from the unfortunate inhabitants of Slave Town, there’s Ordomere the Enlightened, an Ankeshelian vampire. Ordomere is mad, and his very peculiar madness seems to warp reality around him such that he walks in daylight and can violate many of the laws of physics. There is the Mad Prince Deland, the ghost of an Ankeshelian high priest to an unknown deity, now hopelessly in love with Ilnora. There’s the vampire Lord Lucran who dreams of expanding Karn’lothra into an empire and may be at odds with the queen. Then there’s the aboleth loyalist, Mayhana the Betrayer, and the enigmatic entity known only as the Voice. And finally, there are ambassadors from the Great Race of Yith—yes, the Great Race of H.P. Lovecraft fame. The two ambassadors have agendas of their own, though what those are, who can say? (This is certainly an opportunity for the deep magic of mythos magic to be introduced. Note that while Kobold Press doesn’t have statistics for the Great Race, they have been converted to 5E in Sandy Peterson’s Cthulhu Mythos for 5E, and there are homebrew versions online as well.) So there’s quite a lot on the island beyond what’s presented in To the Edge of the World.

Moving on to Leviathan Island, there’s not as much that isn’t duplicated in To the Edge of the World, but beyond the mongrelmen and moonflower groves, we learn about the Vault of Vael Turog, full of arcane spellbooks and scrolls and books of lore concerning the Great Old Ones. Then there’s the island’s population of ghosts, the Lich-King Hagos, and two of his greatest lieutenants, the Black Sorceress Melathea Stross and the tiefling summoner Raldespan the Vile. Other ghosts include Star Druid Undaros, ghost of a star bearer (that is, a no-longer-living star), the ghost of sahuagin prince Mano Maika, and the ghost of Pirate Wizard Larreck. Journeys to the West also includes a “locked-room” murder mystery set in one of the towers on the leviathan’s back during a period when the creature submerges, forcing the PCs and NPCs to solve the mystery while trapped with the murderer. With a few tweaks, that scenario could be added to To the Edge of the World to expand that adventure.

Speaking of adding to the adventure, I should also mention an article on the Kobold blog full of magical items of a starry bent. “Shades of Magic: To the Stars” by Adam Roy provides a lot of really interesting wondrous items to pepper this adventure with. Surely, Star Citadel is the place to go to find radiance bombs, star bearer bubbles (which allow one to survive in a vacuum or under water), a staff of the stars, or even the legendary Skull of the Ancient Star Mariner.

To the Edge of the World is an incredible adventure, and Journeys to the West an amazing resource of Midgard lore. Combining them, one could easily envision an adventure that started in Cassadega, for instance, and moved to the islands. Perhaps an Ankeshelian relic is unearthed in the twin cities, but it accidentally sets off a magical plague or has more of ticking doomsday clock. To cure or defuse it, a phrase in the old Ankeshelian language is needed, but no one speaks it anymore. However, there is a desperate gambit a party of brave adventurers might undertake. An escaped slave from the Bloodless Court tells a story of a mad ghost who speaks the forgotten language. Perhaps Ordomere the Enlightened could be bargained with or coerced to crack the code. Heading to Barsella, the PCs come to the attention of Simez Rothgazzi. The geomancer has heard about their plight. Fortunately, he’s mounting an expedition to Karn’lothra now. He’ll fund the PCs if only they’ll recover something for him while they are there, the Book of Vael Turog. The book, of course, summons a leviathan. The PCs could ride it back to Cassadega, they think, but it sails off the edge of the world instead. Now they have to find their way home from Star Citadel, but time is running out…

That’s just one suggestion of course. But with all the lore in these two books, the possibilities are endless. There’s certainly enough to do exploring the islands for exploration’s sake. After all, it’s not the destination. It’s the journey.

2 thoughts on “From the Archives: Islands at the Edge of the World”