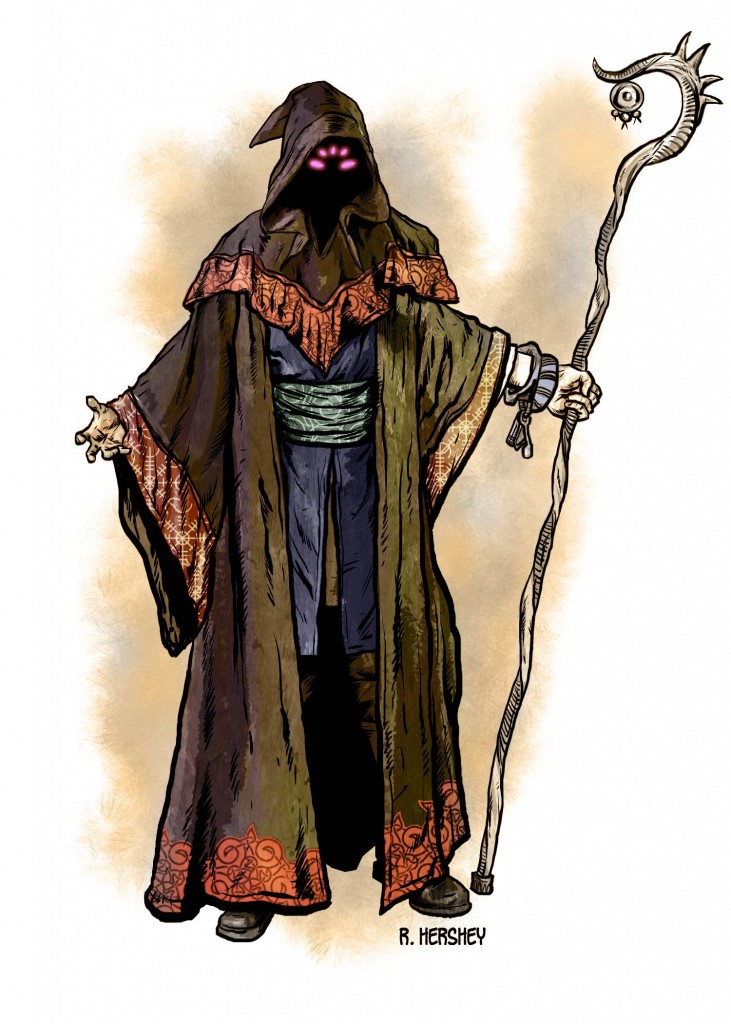 In this third installment, we journey to the bright, burning center of magic in Midgard to meet its greatest practitioner…

Exarch Vermes II is one of the most influential and mysterious figures in Bemmea, a city riddled with mysteries. The inhuman wizard who leads its Ninemage Council has molded his city for centuries into the place it is today.

“Mastery of magic is mastery of the world.”

In Bemmea’s Spire Perilous, presiding over the Council that rules the Magocracy of Allain in the Wasted West.

The spire that houses the Council of Caelmarath rises from atop the highlands of the Bemmean peninsula, at the terminus of the long Mage Road. From here, nine archmages of unfathomable power rule the magocracy of Allain.

Over them all looms Vermes II, the Exarch of Bemmea. Rumors swirl around this ancient wizard. Some claim he is the last pureblooded Ankeshelian. Others call him a half-demon bred from Caelmarath royalty. Old stories hold that beneath his face-shrouding robes is a writhing inhuman form.

Within the Spire Perilous the members of the Ninemage Council scheme and plot in an ancient dance of unusual rules, obscure transgressions, and bizarre rituals. The Exarch subtly manipulates this collection of egos and eccentricities to ensure that things don’t get out of hand. His influence keeps simmering rivalries from boiling over into all-out magical war—though he turns a blind eye to the occasional duel that occurs as a way of relieving pressure.

The Exarch’s missions often involve the weird and horrific, pitting adventurers against forgotten cults and mind-shattering alien horrors.  But the Exarch plays a deep and complicated game. Adventurers working for him rarely discover the true effect their quests have on the world until years later, if at all. If they’re lucky, the Exarch’s true opponents never learn their names.

The Gathering of Thoth-Hermes, a midwinter fair of arcanists and bookbinders, draws Midgard’s sorcerers, wizards, and occultists (with a smattering of clerics) to Bemmea each year. The Exarch will sometimes take advantage of this gathering to hire adventurers for tasks he cannot entrust to local mages.

The Exarch sometimes visits the Master of Demon Mountain and the Courts of the Shadow Fey on matters magical and political, and calls upon Baba Yaga at her hut every New Year’s Dawn. (A bawdy Bemmean tavern song speculates at length on the nature of this annual meeting, though we will not offend our readership’s refined sensibilities by reproducing it here.)

He and the Ghoul Emperor have come to a mutual understanding, and their official representatives are granted safe passage through their respective realms.

Although the Exarch visits the Imperatrix of Dornig each year to pay his respects on her birthday, relations between the two are strained at best. The Exarch and Bloodmother Margase have a well-practiced loathing of one another; and the Mharoti Dragons and the Sultana have their own designs, often at odds with the Exarch, and rarely appreciate his meddling in their affairs.

The Exarch has ruled Bemmea since the days of the Mage War, and was vital in preserving and rebuilding the Magocracy. Indeed, the Wasted West would be even more horrific were it not for the Exarch’s efforts. He is no stranger to the dark paths of magic—but there are much worse out there, and the Exarch’s magic keeps them (mostly) in check.

Eighty years ago, the Exarch destroyed the conspiracy responsible for the Hakren Affair, in which a cabal of demon-influenced scribes assassinated their master by creating enchanted ink and words that turned against the mage and strangled him. More than half of the Council was killed by glyph magic before the Exarch’s divinations exposed the perpetrators. They burned in arcane fire.

Everything will be all right as long as the Exarch is able to prevent ambitious wizards from reawakening the Great Old Ones.