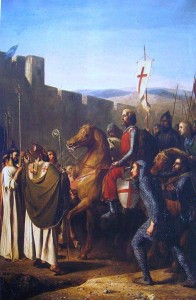 When it comes to putting a party together, it’s important that all the necessary roles are filled. There needs to be a heavy hitter, a trap handler, a healer, and something arcane. That’s the big four that everyone pretty much agrees on, though balances can go one way or another. But what about back stories? How does a lone wolf barbarian, an assassin-in-training, an idealistic wizard afraid of the outside world, and a cleric who has spent her life in a convent come together? Sadly, often times, they don’t. When that happens, or rather doesn’t happen, that can be a campaign killer. Especially if the players forget their characters have an outside goal and resort to splitting off and going their separate ways.

One of the simplest methods to tie a party together is to make sure that they all have to work together. A storyteller can leave this in the hands of the players, allowing them to build characters with intertwining backstories that weave everyone together as a group, for instance. In some games, such as Pathfinder’s Curse of the Crimson Throne there are character traits that act as hooks to lead characters to plot and help them form a party. Sometimes, though, simple hooks aren’t enough to keep things going past the first session or two. This is why many gamemasters assign their characters to a military or paramilitary style unit.

How Would That Work?

It’s a simple enough trope, and if done properly, it can cement characters and concepts together. As a quick for instance, say that an older and experienced group of adventurers (who for the sake of argument all took Leadership) decided to set up a mercenary guild when they retired. Player characters could have come from barbarian backwaters or foreign cities for the chance to be trained by renowned heroes and to follow in their footsteps. It’s a simple plot hook for a storyteller, and it doesn’t require any kind of mental gymnastics to figure out why players are working together. It’s a job, and while you might not like your co-workers, professionals get the job done.

There are all kinds of twists and turns that this could take. For instance, players could be members of an elite squad of the city guard who investigates and handles certain types of crimes. They could be an independent band of thugs for hire with unique skills, like a high fantasy version of The Expendables. Or they could even be part of an irregular military black ops unit that goes on high-risk missions behind enemy lines or on foreign soil. (For an example of this, see my Pathfinder Tales story “The Irregulars.”) There’s an endless variety of flavor and nuance that could be put into it, from spies to sellswords and everything in between.

Some groups of players are going to resist what they might view as the DM railroading their character concepts. For instance, why would a wizard with a low Strength score join the army? You could get comical and say student loan debt, especially for a low-level wizard who needs to put arcane learning to use quickly. Alternatively, you could say that those with arcane skills are highly valued specialists, the equivalent of a demolitions officer if the player is an evoker, or an infiltration specialist in the case of an illusionist. It’s all about flavor, and flavor is what will allow this idea to soar or what will make it crash and burn.

For campaigns where characters are coming in at higher levels, they might have been professional adventurers that have been recruited for their select abilities. Maybe they already have a reputation and honorifics after their names; Burtren Brighthammer the Hero of Heartwright Forge, Glenda Goodwraith the Light of the Divine, or even the Shade are all examples. Say that their country is at war, and the government is calling on heroes to do their part and forming them into squads with important missions. This is similar to how the Office of Strategic Services recruited civilians during the second World War, gave them a perfunctory rank, and sent them out on missions. The only difference is that players are looking for orc camps and necromancers rather than saboteurs and Nazis.

For lower-level games, the easiest way for this to work would be for the characters to respond to a recruitment ad. Perhaps it offers citizenship and the expungement of crimes (as the French Foreign Legion did in the past), a signing bonus and the chance for adventure, or just the opportunity to do something good for the city, country, or world. It makes just as much sense for adventurers that are greedy as well as for those who are moralistic to show up to a call to duty, and it allows the party a smooth, simple way to form up and move out.

Neal F. Litherland is a contributor to Paizo’s Pathfinder Tales, and in addition to the short story “The Irregulars,” he has also published tales such as “Relic of the Red Planet,” which is found in the anthology Sidekicks; and “Heart of the Myrmidon,” which was published in End of Days.

So, have you placed your characters into a military unit in your game? If so, how did you work that into your campaign? And if you played in such a game, what did you like about it? How would you have improved on your experience?

6 thoughts on “You’re in the Army Now”