Skip to content
Home / Delve into the Depths in the Kobold Blog / Book Review: Oathkeeper by: J.F. Lewis 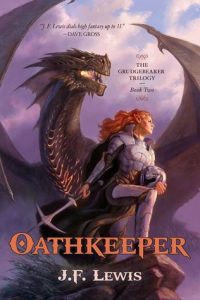 Rae’en has taken her father’s place as the first of the nigh immortal Arn. The Arn are a race created by the Eldrennai (think elf) as warrior-slaves to fight a race of magic resistant lizard-folk called the Zaur. The ascension of Rae’en’s father Kholster to godhood has freed the Arn from their oaths of non-aggression, and Rae’en is looking to pay the Eldrennai for their centuries of enslavement of the Arn. Meanwhile the Eldrennai are at war with a newly re-emerged forces of Zaur, which are more numerous than anyone could imagine. The sentient armor that was once worn by the Arn have sided with the Eldrennai to fight the Zaur. To further complicate matters, the Zaur have launched attacks against the Vael to cut off reinforcements. Prince Rivvek of the Eldrennai has been accepted by the Arn and must claim the Eldrennai throne by completing the Test of the Four so that he can implement a bold plan to save his people from destruction from multiple sources. To make things even more complicated, his brother has hatched a plan to get the Vael to fight the Zaur horde to save their people as well.

If this description sounds complicated to you, you are not alone. Trying to fight a war on multiple fronts is never advised, and writing a book about such a conflict isn’t much easier. Oathkeeper diverges from the normal middle child syndrome that many second books in trilogies suffer. In fact, this book goes balls to the wall and doesn’t let up much. I was glad to see the departure from the sophomore syndrome, but in the process of pushing the story along, Lewis might have pushed too hard.

This is a complex story with many moving pieces and even more characters. In the course of two books, I feel like Lewis has a cast of characters that, if it grows much more or gets more complicated, will need a cast of characters section so it is easier to follow the multiple plotlines that are going full speed right from the starting line. Based on this advance review copy of the book, I would recommend binge reading the first and second books in this series to get the most out of them.

While reading, I felt like there were times when Lewis was barely in control of this story—it was almost like the whole thing sounded better in his head. Now I’m not saying that this isn’t a good story, but the first three-quarters of the book jumped from place to place, and I felt like I was spending so much time trying to reacquaint myself with the characters that I had to go back and re-read several pages to catch exactly what those characters were doing. To top all of the getting-to-know-you stuff, Tsan the lizard goes through a sex change. That’s normal for its race, but it caused some confusion.

As wild as the first three-quarters of this book was, the last part really brought things together. I was thankful for that because I was starting to doubt Mr. Lewis. The writing and descriptions were of the high quality that I have grown to expect from reading Grudgebearer. Each of the races involved with the story acted the way I have been led to believe they should act. Lewis was kind enough to give readers a greater view into this world and the cultures of the races that have helped shape it. I had a wonderful voyeuristic feeling seeing even more behind-the-scenes action with the Tsan. I don’t like them anymore, but they are much cooler after Oathkeeper.

I’m going to re-read this book after re-reading Grudgebearer, and I’m going to binge read them so that I can get the most out of both of them again. Lewis has created a world in which the situation changes as quickly as the weather in Kansas. He is a top-flight author who is writing about a three-front war. If you can keep all of the players straight, you should really enjoy this story.