Skip to content
Home / Delve into the Depths in the Kobold Blog / Memoirs of a Lich: Relationships 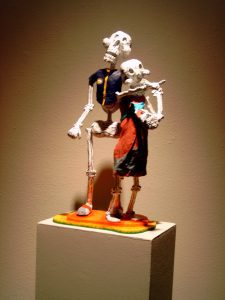 This is Osvaud. We’ve avoided this topic for a while mostly because it is crazy awkward but also to make sure any voyeuristic adventurers were dead ten times over before reading about our love life. If you are one and you somehow managed to get this far… you are seriously messed up if you keep reading. Think of it this way: how uncomfortable is it going to get later on when we are trying to kill each other?

Although… maybe during the surprise round, we’ll stare deeply into each other’s eyes from across the combat. After getting a glimpse into the inner workings of my heart, you’ll see that I’m not so monstrous after all. In return, I might see in you a shadow of my dimly remembered humanity.

I put away my spell components, and you sheathe your magical mace. We talk for hours. We find that what began as hatred has blossomed into something… more…

Which brings us to today’s topic: relationships. They are usually not worth the headaches.

We do get lonely on occasion. Eternity is a long freaking time, and it is perfectly understandable to spend a few decades with some paramour. These sorts of situations are nice while they last but are pretty much doomed to failure. There aren’t a lot of remotely sane mortals that want to shack up with a lich, and you don’t want to get involved with the creeps that are really into it.

That leaves other immortals, and that’s not a big dating pool.

Evil outsiders tend to be too evil for even a temporarily stable relationship. The vast majority are interested for the wrong reasons. You get the super disappointed incubi and succubi, or the bone devils hoping to serve a new dark master. Pit fiends and balors are sometimes okay, but they always put their work first. They’ll show up after being gone for a few years fighting the forces of good like it’s no big deal. Then, they act all mopey when you get on their case for not even throwing you a sending to tell you they’re okay.

Then there’s other undead. Most are dumb or so single-minded they aren’t worth mentioning. Vampires, of course, are even worse than that. You might think oh, other liches then? Not really. Most liches that are cool enough to avoid becoming a bejeweled floating skull have crazy trust issues. No, you can’t read my spellbooks. No, you can’t see my phylactery. Yes, I was out murdering paladins without you. Get off my backbones.

Dragons aren’t quite immortal but close enough for the purposes of this discussion. You’ll want to steer clear here too. They’ll try for sure. I guess it makes sense that they’d be super open-minded given how many half-dragons are running around. I sometimes suspect it is because we do so much crafting, and they think they can squeeze a bunch of magic items out of us. It would certainly explain why they give so much grief when we miss an anniversary.

Oh, and please don’t turn us into one of those guys who crafts a construct courtesan.

3 thoughts on “Memoirs of a Lich: Relationships”