Skip to content
Home / Delve into the Depths in the Kobold Blog / Memoirs of a Lich: Gods 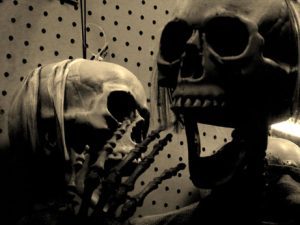 This is Osvaud. We once gave serious consideration to godhood. I think we were rare because we didn’t assume it was amazing. Unfortunately, most (un)holy books are propaganda puff pieces, so we went more direct to the sources. Basically, we murdered an awful lot of outsiders to learn a few vital secrets.

Oh, that reminds me of a fun fact: a bell doesn’t ring every time an angel loses their wings (that’s the saying, right?). It’s more of a crying/screaming sound.

Today’s topic: the gods, and why they suck.

Let’s say you recall a time before the universe existed, and you personally helped bring creation into being. You didn’t do it for any grand goal beyond alleviating eternity’s boredom (we can totally relate to that). You’ve then proceeded to spend a few brief eons screwing around with everything. You expect that eventually you’ll throw an apocalyptic temper tantrum, but nobody gets to make you feel guilty about it because you sometimes cryptically warn them about it if they take a bunch of drugs.

Different hypothetical scenario. You were born some epically awesome mortal superstar. Maybe you’ve got divine parentage or a mystical butterfly birthmark on your rear. The specifics aren’t important, but basically you get told a lot that you’re the greatest and bestest ever. Those preconceptions then get verified by you waltzing your way into godhood. You ascend to the Outer Planes, ready to accept your rightful place at the helm of creation.

Unfortunately, you run headlong into that first set of entrenched emotionally stunted fossils. The elder gods generally think you are an upstart idiot that needs to shut up while the adults are talking. Used to being at the top of every peer group, you react with understandable frustration. Since you’re a literal god though, this often means crusades, ill-conceived cosmic schemes, and overcompensatingly massive monuments.

Even if one of the newb gods ousts a bigwig, all they do is paint a giant target on their head. They’ve got the other ancients looking to make an example out of them, and their fellow amateur deities thinking they can slip into the vacated spot when the smoke clears. Worse, everybody fundamentally recognizes this, so the status quo almost never truly shifts. Gods seem like the players at the poker table of reality, but it is more like a bunch of doofuses cheating at solitaire.

In summary, the majority of gods are overentitled, unsatisfied, and worthless. Personally, I’d far rather be the bad guy than a plot device. However, that leaves us in an unfortunate position as significantly weaker than a whole bunch of frustrated, self-centered jerks. Luckily, we have a plan if a god ever really starts screwing with us.

You have an army of efreeti simulacrums stashed on a demiplane somewhere. They can simultaneously cast three wishes per day. That should be enough to level a few hundred temples, kill a few thousand clerics, and create the biggest permanent illusion of a skeletal middle finger the Outer Planes will ever see.

Huh. I guess if you ever accidentally ascend, you could totally make that your unholy symbol too.

2 thoughts on “Memoirs of a Lich: Gods”