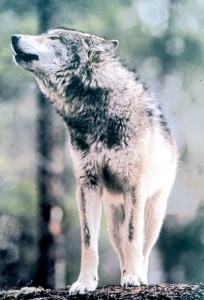 The wolf is a natural hunter. Every instinct tells it to be ever aware, watching the world as if it were prey. Some wolves cannot shake this primal urge even in death.

Lore (Nature DC 16): These great wolves no longer notice the passage of day and night. Their life is one eternal long hunt: they never tire, stop to rest, or feast on anything they cannot fight or chase. This makes them nearly impossible to train, but some tribal shamans can call them, keeping them docile with great difficulty until needed.

Lore (Religion DC 21): These wolf spirits often gather near other undead, especially ghouls and wraiths, sensing their mutual hunger. In combat, it always the wolves that you cannot see that present the greatest danger…

Tactics: The spectral wolf prefers to let any non-wolf allies attack first. It then either sneaks or teleports into combat, attacking the wounded. It focuses on a prone target until others start to surround it. It then uses otherworldly jaunt to escape, choosing a new target that is more isolated.

TRAITS
Combat Advantage
If the spectral wolf has combat advantage against its target, the target is knocked prone on a hit.

MOVE ACTIONS
Otherworldly Jaunt (teleportation) • At-Will
Effect—The spectral wolf teleports 4 squares. If it has no adjacent enemies on arrival, it becomes invisible. The invisibility ends when it attacks or at the end of its next turn.