Skip to content
Home / Delve into the Depths in the Kobold Blog / Ritual Life: The Way of the Derro 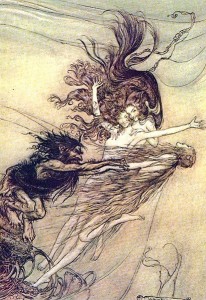 The derro are masters of ritual magic. Their mad insights and devious, malignant nature allow them to craft rituals unknown on the surface world. Derro rituals reflect the intellects behind their inventors and grant the ability to torture other creatures, lay better ambushes, and protect the approaches to their home caverns.

Clever or daring adventurers might discover a derro ritual after driving the vermin out of their hiding holes. Of course, the insane derro don’t keep ritual books the way others do. A derro ritual might be written on a cave wall or tattooed onto a slave’s flayed skin.

Aspect of the Roper

As the shaman finishes the ritual, you feel no different, but your friends have turned into stalagmites…

This ritual allows you and up to five other creatures to take on the appearance and characteristics of stalagmites. As long as you do not speak, move, or attack, you gain a +10 bonus to Stealth checks when hiding in natural caverns, and you gain resist 5 to all damage.

As a free action, you can dispel this effect to act normally. If you do so, you may revert to the stalagmite form at the start of your next turn as long as the ritual has not ended.

Bones of the Earth

Your voice fades with the final words, and the ground before you erupts in an explosion of dirt and stone. The skeleton of a great, clawed beast rises from the pit. Once of a race that dominated the earth, the thing is now subject to your will.

You animate a fossilized skeleton from a race of creatures that once ruled the earth to guard the area in which it rises. Your Arcana or Religion check determines the size and strength of the creature, the amount of damage it does on an attack, and the size of the area it guards.

If you desire, you can summon a smaller creature than your check determines. If the skeleton somehow moves outside the ritual’s area, the ritual ends and the skeleton collapses into inanimate bones. The skeleton will not voluntarily move or attack outside of its designated area.

When casting the ritual, you may designate any number of individuals or categories of creatures the guardian will not attack. These categories can range from specific physical characteristics such as hair color, to creature type, creature race, or even equipment carried.

If attacked, the skeleton uses your defenses. It has a move of 6, and it attacks once per round. Its attack roll equals your level +6 vs. AC. As an undead creature, it is immune to disease and poison and possesses resist 10 necrotic and vulnerability 5 radiant.

The derro raid your colony every fortnight. When you pursue them, the tunnels that normally accommodate your people are strangely narrower, slowing the chase and allowing the humanoid vermin to escape with their captives.

When you cast this ritual, you narrow an underground corridor by 1 or more squares. Your Arcana or Nature check determines the length of the tunnel you can affect, the reduction in the tunnel’s width, and how long the ritual lasts.

You can choose to reduce a passage by a lesser amount than determined by your check. This ritual does not allow you to completely close an underground tunnel. If your Arcana check would allow you to close a passage, the affected area becomes narrow enough to only allow the movement of Fine creatures.

The ritual creates new stone; it does not move stone and, therefore, does not affect the stability of the surrounding area.

You come upon a natural cavern, stalactites revealed in the glow of your torch. Halfway across the chamber you find a stalactite protruding from the chest of a humanoid’s skeleton. The unfortunate was skewered by a falling rock. Too late, you realize the danger as stalactites rain down.

You cause the ceiling of an underground cave to grow stalactites that drop onto creatures passing beneath them. Your Arcana or Nature check determines the size of the area affected and the amount of damage a falling stalactite inflicts.

A creature passing beneath a square in the burst area is subject to an attack equal to your level +4 vs. Reflex. On a hit, the target takes the damage listed above, or half damage on a miss. After the attack, the target’s square is considered difficult terrain. A triggered square cannot drop stalactites again until the ritual is recast.

A successful Dungeoneering check with a DC equal to your Arcana or Nature roll lets a potential victim realize something is not right about the ritual’s area.

As part of the ritual, you may designate creatures (by name or type) that can pass freely through the area.

The Roots of Madness

You enter the mind of an enemy far away. You make it see and hear things that are not there, horrible images of death, murder and depravity. Slowly, its personality crumbles before the onslaught, until nothing more is left than a whimpering piece of flesh.

When you cast this ritual, you cause a creature to see and hear illusions. These figments are disturbing images of violence, foul creatures, ghosts, and horrible events. They assault the victim’s psyche, making it more vulnerable to mental attacks.

You need not personally know or have ever seen the subject, but when performing the ritual, you must know the name of the ritual’s target and possess a focus as described below.

Sufficiently powerful warding magic, such as Magic Circle, can block Roots of Madness.

If the target dies from psychic damage while under the effects of this ritual, it rises as a derro ambusher at the start of his next turn. (See Halls of the Mountain King for the derro ambusher’s stats.)

Focus An item taken from the creature’s body such as hair, nails, or a patch of skin.

2 thoughts on “Ritual Life: The Way of the Derro”