Skip to content
Home / Delve into the Depths in the Kobold Blog / Lethal Lairs Finalist: The Red Cliff of Akhal

Welcome to the fourth of the Lethal Lairs finalists, which are presented in no particular order. Our esteemed judges have enjoyed going through each of the entries for this contest, and now you can read each of the five they chose as finalists! After we present all five — unedited — you’ll have a chance to vote for your favorite. Thanks go to both our entrants and our judges for their work! And now, finalist Zac Corbin presents you with “The Red Cliff of Akhal” — enjoy!

These bandits raid caravans travelling the trade routes near the Red Cliff of Akhal, a lone tower of russet-colored rock rising hundreds of feet above a vast salt flat.  The raiders are led by a pair of orphaned twins, Najib and Zobeida, whose tribe was put to the sword 8 years ago by the Claws of Bastet.  The twins were in the wastes participating in The Trial of Jadara when the priests came and slaughtered the Abn Awaa Tribe.  After the massacre, they survivrd in the desert wastes, all the while nursing a burning hatred for the people of Bastet.

Najib and Zobeida, now 15, have gathered a motley group of followers and continue in the traditions of the Abn Awaa Tribe, which they have begun to call themselves.

The Red Cliff of Akhal is actually an asteroid that crashed into a small, primordial sea.  When discovered by ancient desert tribes, the spire became a sacred shrine to the sky god, Akhal, before it was mysteriously abandoned centuries ago.  Legends say the cultists awakened something within the rock that drove them to madness, slaughtering each other in the process.  The spire is now used as a landmark along a popular trade route near the city of Bastet.

Intrigued by the legends and full of adolescent bravado, Najib and Zobeida dared to traverse the salt flat and explore the Red Cliff.  Inside they found ancient bones, the ruins of the shrine, and surprisingly, a small cistern.  The new Abn Awaa Tribe quickly moved into the monolith and began their raiding. The twins were drawn deeper into the mysteries of the ancient Cult of Akhal.  They discovered hidden chambers deep within the spire containing strange devices and writings in languages unknown in the Southlands.  Eventually, they found a tomb containing a column of glowing, red crystal inside of which a humanoid figure was entrapped.

Much to their surprise, the figure was alive and began to speak with them, revealing many secrets both arcane and martial.  Akhal, as the being soon became known, inspired even more daring raids and loyalty.  The twins began calling themselves the Fangs of Akhal and the rest of the tribe soon followed their leaders’ devotion and a new Cult of Akhal was born.

Many caravan masters beseeched the Priests of Bastet to do something about this new threat to the region.  It did not take long for them to send the Claws against the Abn Awaa.  The opposing forces met upon the wastes several leagues from the Red Cliff of Akhal.  A fierce storm served to shroud the battle, but when it was concluded not one of the Claws remained alive.  Since that day the raiders have pillaged without challenge.  The Priests of Bastet still nurse their wound, searching for a way to deal with the thorn in their paws.

The raiders of the Red Cliff typically only seek out caravans containing supplies necessary for survival or those which contain cargo that is precious to the Fangs or Akhal himself.  These items are usually rather esoteric in nature and of little monetary value but are required for the ritual that will free Akhal from his prison.

General Notes:  The stonework is serviceable.  The stairways connecting rooms are cramped, imposing disadvantage on any attacks with weapons larger than a dagger. Crude carvings and paintings of snakes are present throughout.

Unless specified, all of the rooms are naturally lit. 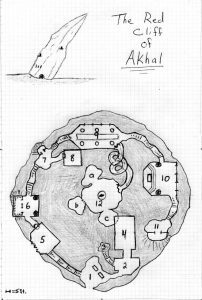 When the word raider appears, you could use bandits, cultists, or scouts.  Akhal, Najib, and Zobeida have their stats described at the end of this document.  All monster statistics can be found in the D&D 5E Monster Manual.

A group of 20 mounted Abn Awaa raiders and gnolls led by Najib or Zobeida is usually out on patrol.

Akhal: use Yuan-ti Abomination, but add telepathy 30 ft.  He has deranged from his captivity, believing he is actually a deity.  He is still dedicated to world domination though.

Najib:  use Yuan-ti Malison (Type I) with the following changes:

Zobeida:  use Yuan-ti Pureblood with the following changes:

1 thought on “Lethal Lairs Finalist: The Red Cliff of Akhal”