The kitsune are a PC race for 4th Edition D&D in Kobold Quarterly #9 — but they’re also available as a 3rd Edition/OGL PC race right here. Because free is good. 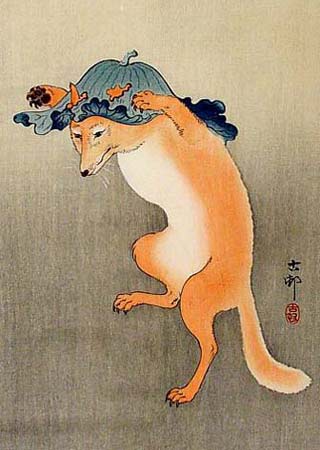 In myths and legends, the kitsune are shapeshifters with their own racial items, incantations, and their own innate magic. What makes these tricksters tick? A sense of play and a streak of roguish amusement, at the very least.


[More…]
• Quadruped You are unable to hold items, such as wands, weapons, and shields.
• Scent
• Natural Weapon bite (1d4)
• Tails You can use your tails for somatic spell components. An additional tail appears every 2 levels.
• Skills +2 racial bonus to bluff
• Alternate Form (Su) You can alter your form just as the spell alter self, with the following exceptions: you can only take on forms of humanoid type, and you lose the ability to use fox magic while not in fox form. You can perform this transformation (including back to fox form) at will as a full-round action. Your fox form is your natural state, and you will revert to it upon death.
• Fox Magic (Su) You can use these innate spell effects, known collectively as fox magic, once per day at 1st level with an additional use per day for every 3 character levels after. Each effect requires a minimum character level. While many potential fox magic effects exist, only a few are revealed here. You must seek out and learn new effects; while you are limited in the amount you can use per day, there is no limit to the amount you can know. The caster level is equal to ½ HD (minimum 1st). Save DCs are Charisma-based.

Foxfire (3rd)—You can summon a ball of fire and lightning to float gently around your head and unleash fury upon your foes. As a standard action, you can summon the ball and direct a bolt of fire and lightning from the ball toward one target within 60 ft. and, with a successful ranged touch attack, deal 1d8 points of fire and electricity damage (half each) per 3 caster levels. The effect can be maintained in subsequent rounds, using a standard action, on the same or a new target in range, but with a miss, the effect ends.
Special: Star ball bonuses are added to attack and damage rolls.

Circle of Foxes (7th)—You can summon illusory foxes to surround and confound your foes. As a standard action, you can create a number of illusory duplicates of yourself equal to your Charisma modifier. The duplicates appear anywhere along the border of a spread with a 25-ft. radius emanating from you. Immediately by teleportation, you can surreptitiously switch places with one of the duplicates.

All actions taken by the duplicates are illusory, but the duplicates do provide flanking opportunities. The duplicates use your AC (excluding armor) and save values, and they dissipate in a puff of smoke if damaged. Undamaged, the duplicates will dissipate after a number of rounds equal to your level, upon travelling 100 ft. or more from you, or at your will.

After the first round, you can surreptitiously switch places with one of the duplicates, using teleportation as a move action.

No material item is cherished as highly by a kitsune as their star ball. Created ritually from a polished precious stone—possibly jade, opal, jasper, ruby, or hematite—each is different and uniquely crafted for and attuned to an individual kitsune. These items typically lie embedded within the forehead, serving as foci for fox magic, although kitsune often release them (a standard action) for a time to admire and play with them. An extension of its kitsune wearer, a star ball is a physical, emotional, and spiritual manifestation of the kitsune; the theft or desecration of a star ball is met with fierce retaliation.

Unable to use the implements of man while in fox form for lack of hands, kitsune also rely on star balls as the foci for other magics (see Star Ball Convergence below). Kitsune need not necessarily be in fox form to benefit from the power of star balls although fox magic abilities still require being in fox form.

A star ball is created using the weapon creation rules and is just another weapon in the hands (make that forehead) of a kitsune. While worn, the star ball bonus (or weapon bonus) adds to the kitsune’s bite and damage, and often modifies fox magic in some way (see individual fox magic entries). Additionally, star ball special abilities (or weapon special abilities) are transferred to the kitsune’s bite attack. For example, a bite from a kitsune wearing a +2 flaming star ball would add an additional +2 to attack and damage rolls and an additional 1d6 fire damage beyond the damage that just the bite would do. Only one star ball can be worn at a time, but additional qualities can be added to a star ball using the Star Ball Convergence incantation.

Star Ball Convergence
Transmutation
Level: sorcerer/wizard 4
Components: F, S, V
Casting Time: 1 min.
Range: touch
Target: 1 magic item
Duration: instantaneous
By completing this spell, you subsume the power of another magic item — such as a weapons, rods, staves, wands, or their psionic equivalents — into your star ball. The new star ball retains the abilities of the old star ball in addition to those of the new item. The targeted item must be an implement that you have access to (such as a staff by a kitsune wizard). The new star ball has a level equal to the added levels of all subsumed implement and the original star ball. There is no limit to the number of items that can be combined in this fashion provided you spend the required time and gold. Enhancement bonuses do not stack, and the new star ball takes on the highest of these from all combined items; however, all charges and powers of the items are available.

Effectively, this spell allows you to store the charges of a wand or the powers of a rod, for example, in a device that you can actually use; otherwise, without hands, that wand and rod themselves are useless to the kitsune. This spell is not reversible, and targeted items crumble to dust.

Kitsune have a long tradition of ritual magic.

Fox Possession (or Kitsune-Tsuki)
Transmutation
Effective Level: 6th
Skill Check: Knowledge (arcana) DC 26, 3 successes; Knowledge (nature) DC 26, 3 successes
Failure: Sleep
Components: V, S, M, B, F
Casting Time: 60 min.
Range: Personal
Duration: 1 hour
By completing this ritual, you take on a spirit form, invisible to the naked eye and possessing a fly speed equivalent to your movement, and have one hour to find and possess a living humanoid target before reverting to normal form. You can automatically enter a host, and once inside, you may remain there indefinitely without the target’s knowledge. You can leave whenever you want, but when leaving the body, your spirit form lasts only 2 min. before you revert to normal form. Because of this, kitsune typically leave when the target is sleeping to avoid detection.

If you remain in the target for 3 hours, you can surreptitiously insinuate your will over the target: this requires the target to make a Will save (DC 10 + ½ HD + Charisma modifier) for each hour you’re in control, during non-combat; if the target enters combat, new saves must be made every round to insinuate your control. When the target succeeds 3 such saves, no matter the situation, the target becomes aware of you.

You can access the target’s senses when you have control—whether insinuated or forced. You can control the target to do anything that is not obviously suicidal. These guidelines apply whether the control is by insinuation or by force.

If the target dies while possessed, your spirit form leaves the body and appears next to it at -1 hp and dying.

You must be a kitsune and in fox form to perform this ritual.

Failure: Failing two consecutive skill checks, the caster falls asleep for 24 hours and cannot be awoken before that time.
Material Components: The caster requires currency and shiny baubles worth 500 gp.
Focus: The caster must be a kitsune and using a star ball.
Backlash: All the power of the caster’s star ball is suppressed for 24 hours.

For more information on the kitsune, pick up Kobold Quarterly #9 now — or subscribe and get a FREE set of Q-Workshop dice while supplies last!

This article was inspired by a request on the KQ Forum.