Skip to content
Home / Delve into the Depths in the Kobold Blog / The Feast of Volundstag, Part One 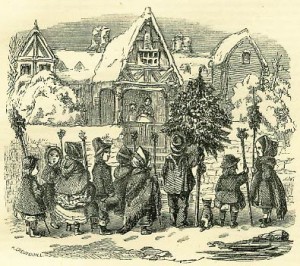 The feast of Volundstag is an example of a winter festival right out of my current campaign. It offers a lot of different social and political adventuring options, as well as the more physical aspects of an urban setting.

All Zobeck looks forward to the beloved winter festival, the sacred Volundstag! As the winter’s cold grasp grips tightest, and the nights loom longest, many a starving kobold pup and a poor child of the slums looks toward the temples of Volund and Rava with stars in their eyes, waiting for the solstice miracle.

We’ve talked about harvest festivals in campaigns, and as the year’s wheel turns, we get to the desperate, cold days of deep winter. In a world without central heating and transport of fresh food, winter can be a miserable, desperate time. A good winter’s festival allows the well off to buy the loyalty and good will of the poor, to fulfill their lordly duties, and to gain influence. All told, Volundstag is a religious festival, a competition between neighborhoods, and a show of wealth by lords and merchants.

Before the feast of Volundstag, the people of Zobeck decorate their houses and neighborhoods. Zobeckers of all races place wicker wreaths in the shape of anvils or gears on their doors. Humans often place sprigs of evergreen as well, to honor Yorila and Porevit. Dwarves symbolize life and rebirth with mushroom clusters, and they place those on their doors. In imitation, the doors of the kobold ghetto spring to life with pick-axes, bear-traps, and dead rats, these being the means of survival for the little scaly folk. Neighborhoods compete to have the most elaborate decorations, and sometimes sabotage occurs.

The people of Zobeck engage in a procession the afternoon of Volundstag, with each neighborhood having created a float to represent the local saint or deity of importance out of colored paper, gold leaf, and wood. They carry these floats about the neighborhood during wassailing (see below), and then place them in the neighborhood square in preparation for the feast.

On the evening of the solstice, the people go out and travel door to door, sharing drinks with the householders of the town. Each race provides different drinks and has different decorations, but all keep a pot of hot alcohol ready for wassail visitors. It is an ancient tradition from the north, brought by men and dwarves from the ironcrags, and considered holy to Volund, and to Yarila and Porivit.

Each house has a great bowl or cauldron of hot spiced wine, ale, or mead. Halflings often create a strong cider using many types of dried fruits. Dwarves provide hot spiced ale. Kobolds make a vile mixture of distilled alcohol and rodent blood known as wassailing cruor, which other races scrupulously avoid, while the kobold kings compete to trick too-talls into drinking it. The menfolk of Zobeck usually have a hot spiced wine or ale, with chunks of apples and pears as well as Sikkimese spices. People go around for a few hours before the temple services, greeting each other in their houses and drinking the Waes Hael. Being able to provide a drink for the wassailing is a sign of prosperity and prestige among the neighborhoods, and this practice is expected of those who have work.

Waes Hael is an anvil Dwarvish term that means “be well.” The householder offers a glass of whatever is on the boil to the visitor, crying out “Was Hael!” (good health) and the drinker returns with “Drink Hael!” (drink and be healthy!) and quaffs the drink.

The Crunch: For player characters, have them make a Fortitude saving throw for each drink, with a –1 penalty for each previous drink. If a character fails a DC 15 save, he or she gains a –1 penalty to all rolls. Drinking the kobold cruor involves a second Will save at DC 10 vs. nausea. The dwarven mulled fungus brandy has a –2 to all saves since it is “festively strong.” Be assured that all the player character’s friends and acquaintances will be actively trying to curry their favor by wassailing them . . . whether they want to or not!

Watch for part two tomorrow, wherein we learn more about Volundstag and its various ceremonies.

1 thought on “The Feast of Volundstag, Part One”