Skip to content
Home / Delve into the Depths in the Kobold Blog / Khazzak Vagabond: A Background 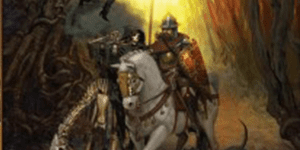 A nomad among wanderers, an outsider among exiles, yours is a storm-touched tale. The open sky and wind-brushed tundra were blanket and bed to you, the thunder of hoof beats, a lullaby. To you, “civilization” was wind-snapped yurts and healthy herds; words like city meant tents and wagons and carnivals, leather and wheels and rope.

Among the mixed tribes, horse clans, and khanates that form the Khazzaki nation, anyone who openly swears fealty to the great khan is welcomed and accepted as kith and kin. Horse riders and priests, archers and anarchists, you take pride in your shared heritage with these geographically and racially diverse people who despite frequent volatility still remain cohesive and surprisingly disciplined enough to enforce dominion from the Cloudwall to far Cathay.

Despite being born (or fostered) among these free-spirited people, yours was a distanced, “misplaced” sense of relation. Perhaps an old taboo or family dishonor needs erasing, or you simply remain haunted by wanderlust, even among tribes of wanderers.

Now, south and west you’ve traveled, perhaps through Khandiria or the forest steppes of western Hariz toward the Dragoncoil Mountains and the gleaming wonders of the weird “civilizations” that lay beyond.

Most likely, you first set course for Tabur (waypoint for many, destination for few), the true borderlands of the “stone pilers” and “horse eaters,” the fringe lands of the Dragon Princes and their slaves. 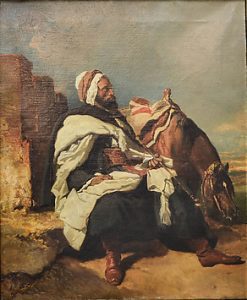 Perhaps you were a tribal hunter or soldier, a courier or tundra scout for a regional khan. Whatever the reason, your riding and hunting instincts are exceptional.

In your downtime, you are able to train and maintain a loyal pet or mount. This might be a domestic pet, such as a dog or bird of prey, or it might be a mount or pack animal, such as riding horse or a donkey. They are loyal as long as you treat them well and are capable of following up to five trained commands (or whistles), such as attack, fetch, come, home, hunt/graze,  guard/stay,  sit, wait, and so on. They will attack or flee if threatened or prompted by you, but you do not control them. They will likely attempt to flee if injured or spooked but will return as they are able.

For more on the conquering khans and caravan cities of the Khazzaki, be sure to check out the Midgard Campaign Setting from Kobold Press. Or

1 thought on “Khazzak Vagabond: A Background”