Skip to content
Home / Delve into the Depths in the Kobold Blog / Dunsany & Dragons: Adventures from English Literature 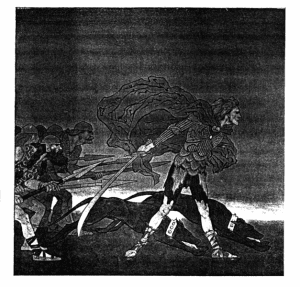 Lord Dunsany’s (1878–1957) works have been cited as sources of inspiration for the most famous fantasy roleplaying game since its first edition in the late 70s. His short tales, in particular, are really “fantasy” in the modern sense: most of them follow the “hero’s journey” model, involving young brave adventurers involved in situations dealing with magic swords, monsters, spells, and gods belonging to fictional pantheons.

In the following, one of Dunsany’s tales is “translated” into the structure of a fifth edition adventure.

(Note: when a creature’s name appears in bold type, that’s a visual cue pointing to the creature’s stat block.)

“Now in the time I tell of, there was trouble in Allathurion, for of an evening fell dreams were wont to come slipping through the tree trunks and into the peaceful village; and they assumed dominion of men’s minds and led them in watches of the night through the cindery plains of Hell. Then the magician of that village made spells against those fell dreams; yet still the dreams came flitting through the trees as soon as the dark had fallen, and led men’s minds by night into terrible places and caused them to praise Satan openly with their lips…” (Lord Dunsany, “The Fortress Unvanquishable, Save For Sacnoth”) 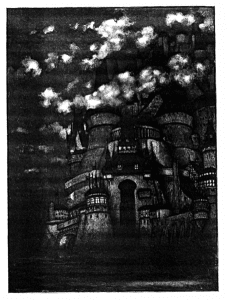 Included in The Sword of Welleran and Other Stories collection, this short story can be used to fashion a fantasy adventure for characters of level 9–10 through the following steps:

Step 1, “Troubles in Allathurion”: The dreams of the inhabitants of the peaceful village of Allathurion are troubled by terrifying nightmares. Lorendiac, the local lord, asks the PCs to find the cause of the strange phenomenon before all the people are forced to leave the village. Using the means they see fit, the PCs shall discover that the origin of the nightmares is the alien wizard Gaznak (an archmage) who feeds itself off the fear caused by the horrible dreams. Gaznak lives in the Fortress Unvanquishable, a steel tower accessible only by destroying its door using the magic sword Sacnoth.

Step 2, “Kill Tharagavverug”: Lorendiac’s court wizard reveals to the PCs that Sacnoth is, in reality, the strongest scale of Tharagavverug, the dragon-crocodile (use the young bronze dragon stat block, but change the alignment to Chaotic Evil). The only way to obtain the sword is by killing the dragon.

Step 3, “Into the Fortress”: The last act consists of reaching Gaznak’s tower at the center of a ghastly swamp. The first guardians of the place are terrible gargoyles, but the interior is still more dangerous, encompassing Gaznak’s praetorians (knights), his “pet” (a yochlol demon), and the three powerful spirit nagas called Thok, Lunk and Wong Bongerok. But perilous hazards other than the monsters threaten the PCs life in the tower: extradimensional abysses and crevasses randomly open under adventurers’ feet, and Gaznak’s seducing cultists and warlocks will try to corrupt the brave heroes.