Skip to content
Home / Delve into the Depths in the Kobold Blog / Book Review: Forge of Ashes by Josh Vogt 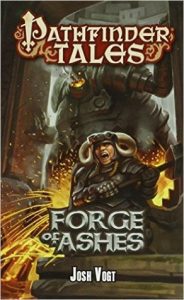 After fighting in the Goblinblood Wars for ten years, the dwarf berserker Akina has returned to her home in the Five Kings Mountains. They say you can never go home, and it is proving true for Akina. Accompanied by her monk friend Ondorum, Akina finds that much has happened in ten years and little of it is good. After entering the gates of her home city, she is assaulted by carved images of herself, which show her to be a hero. While that would make most happy, these images do little to help Akina keep the low profile she is hoping for. After seeing her face carved all over town, she heads to her mother’s shop to find that she has gone missing and the shop is being run by her former lover and her mother’s former apprentice. Apparently he hasn’t let go of their old relationship and is ready to start things up again. To make things even worse, her brother has not only fallen from the graces of their church but he now raves about the evil and sadistic Dark Dwarf God—not cool! All of this and her brother gets kidnapped and taken to the legendary Darklands. Now Akina and Ondorum must journey way below the ground to save her brother, plus possibly find her missing mother and maybe a few other important things while she is days below the surface…

The premise of this story is nothing new. Many of the elements of it are old hat, but when you put a fresh new author behind it, it all feels shiny. Josh Voght is impressive with his debut novel Forge of Ashes. This is much more than just a “you can never go home” story. Forge of Ashes really delves into the character’s inner-most thoughts and feelings. Rather than seeming like a horrible introspective indie film, the book still reads the way a Pathfinder Tales book should read.

Akina is a dwarf berserker. I have read some people describe her as a barbarian, and if you were playing her at the game table, mechanically she would be. But, as she is written, she is a fighter with levels in berserker. Rather than simply destroying everything in her path, eating large hunks of beast and rutting to her heart’s content, Akina is an accomplished fighter who has tapped into the ability to enter a rage state. Everything else about her is civilized. In fact, with the help of her monk friend, she is actually sort of managing that rage, or at the very worst saving it for times when it is really needed. She has no problem giving in to the rage and enjoys the hell out of a good fight, but there is a part of her that wants to control it. Akina was more than just her ram’s helm and maul axe; she had feelings and, while at times her reactions were predictable, they always felt genuine. The nature of many of the one-off stories in these types of books dictates that there is little time for character development foreplay. Vogt gave me a good working knowledge of Akina and several of the other characters without wasting any story space.

There was, however, one backstory that needed a bit more play ahead of time, and that was the relationship between Akina and her obsessive suitor/former lover Gromir. In a very odd way, Gromir and Professor Snape of the Harry Potter series have much in common. I won’t get too deep into that, because why spoil things? The lack of lead-up to Akina’s and Gromir’s past made things feel awkward and a bit forced at first. On one hand, I can see how Vogt was trying to set Gromir up as someone that Akina didn’t even really factor into her feelings anymore, but because of the role that he plays in the story it might have played out better if he had been one of her major concerns from the beginning and that she had expressed that more boldly to her silent companion.

While Akina and Gromir were great fodder for drama and interest, Ondorum was by far a unique and the most well-written character in the entire story. This, of course, is ironic because he has taken a vow of silence. Even with that vow, Ondorum is far from quiet. Ondorum is a monk, so the vow of silence is appropriate, and even the reasoning behind it is legit. In fact, his vow has nothing to do with the order that trained him, which makes his vow feel even more unusual. His dialogue is internal, and when he interacts with Akina and others, Vogt didn’t try to magic his way around the vow. He stuck to it and made it painful and difficult for everyone involved, especially Ondorum. I am convinced Vogt was at one time a monk himself, or is deeply into meditation and self-awareness. All of the thoughts and feelings that Ondorum had felt like the real deal, and the descriptions of him harnessing his ki were some of the best I have read in a long time. So often monks are portrayed in fantasy worlds as martial arts monkeys who are very disciplined; Ondorum had some amazing abilities, but it really was his inner character that made his monkness stand out. He was contemplative and introspective, and his lack of outer dialogue let the reader see the inside of a monk, not just the punch flinging, unarmored martial arts monkey.

Forge of Ashes has several other very well-written characters that I hope you will enjoy getting to know as much as I did, but stories like this cannot thrive on well-written characters. Those well-written characters need to be doing cool and interesting things, and this book has plenty of that. Vogt plunges the reader right into the action—yes, it took a few chapters for things to really heat up, but even during the setup, Vogt throws in some great back-alley fights and at least one encounter that I can’t talk about (I don’t want to break the first rule). Best of all, this action isn’t there for action’s sake; it helps us get to know the characters better. Vogt has writing chops, and these characters have the legs to turn into people that readers want to read more about. Let’s just hope that Paizo sees what I saw and wants to publish more of his stuff. Forge of Ashes carries on the Pathfinder Tales tradition of excellent writers writing excellent stories in an unexpected place.