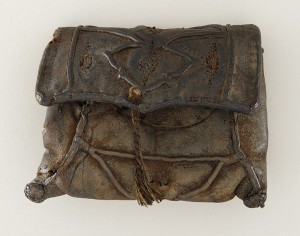 This unassuming brown leather bag appears to be little more than a bag of holding, albeit one with a very strong aura. Originally, that is what it was. In an attempt to make money, a misguided wizard was experimenting with a way to connect one bag of holding with multiple others, as well as portable holes, through extradimensional spaces. Knowing the risk involved, he did so in secret not only to protect others, but to protect his investment should his experiments work. But because of a misspoken word during his testing, he accidentally created a new pocket dimension and filled it with the contents of every bag of holding, portable hole, secret chest, and any other extradimensional space at the time.

Calling his mistake the bag of lost things, he soon became the target of many irate adventures and fellow magicians. Shortly after this, he disappeared without a trace, and the bag was removed from his laboratory and has traded hands many times. Adding to the mystery of the bag is that no matter how much is pulled from it, it never truly empties. Many now speculate that before he disappeared, the wizard somehow changed the space the bag is attached to so it attracts items that no longer have owners.

The bag may be used safely once per day. Any attempts after this to draw items from the bag result in a 10 percent chance of the user being drawn into the bag. This percentage stacks for each successive use. Anything put into the bag, or anyone drawn in, can be recovered only by a miracle, wish, or a successful draw from the bag itself.

DESTRUCTION: The bag of lost things can be destroyed only if all the original items are returned to their owners (or their descendants) and the bag is taken back to the lab in which it was made and is returned to its creator.

6 thoughts on “Bag of Lost Things”