Skip to content
Home / Delve into the Depths in the Kobold Blog / Trap Themes (Part 2 of 5): Curses of the Dread Pharaoh 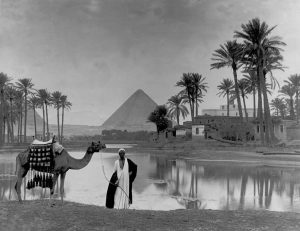 Each theme presented introduces new powers—adding one does not affect a trap’s XP value, but upgrade a trap to an elite or solo if you apply two or more themes. [part 1]

Since the first expeditions to strange and ancient kingdoms of the desert, stories of the mummy’s curse have captured the imagination of all who hear them. The deific pharaohs of forgotten ages lie buried with their vast treasures in labyrinthine pyramids. Those who dare to disturb such wealth meet their end, sooner or later, under grotesque and mysterious circumstances.

The curses of the dread pharaoh trap theme help you blend classic traps neatly into pyramids, tombs, desert shrines, and other remote places where godlike hierophants sleep beneath the sands. Glyphs of warding might be re-skinned as potent curses etched in hieroglyphs, kissing maidens become sarcophagi that spring open on iron coils, and rooms flood with sand, snakes, scorpions, or embalming wax…

Traps with the curses of the dread pharaoh theme inflict debilitating, enduring conditions on intruders and those close to them. They work best when combined with swarm monsters, skirmishers, and brutes that can pummel dazed or immobilized PCs, and also pair up well with effects that inflict saving throw penalties.

Skill Modifications: Increase Perception DCs by 4. Additionally, a PC can detect a curse of the dread pharaoh trap with a Religion check (hard DC).

Blight upon the Firstborn

An ancient disease afflicts the first child of those who disturb the vessels of the honored dead.

This power works well in campaigns where the players have cultivated strong relationships between the PCs and their NPC family members, especially children.

Blight upon the Firstborn (disease, reliable) • Encounter
Trigger—A living creature fails a skill check or attack roll against the trap.
Attack (Immediate Reaction)—Level + 3 vs. Will.
Hit—If the target has children, it receives the mark upon the firstborn curse (see below). The curse’s level is equal to the trap’s level. If the target has no children, it instead contracts barrenblight.

Mark upon the Firstborn (Curse)

Stage 1: While affected by stage 1, the target grants combat advantage. In addition, the target takes ongoing 10 psychic damage per tier while within 5 squares of a human or demi-human child.

Stage 2: While affected by stage 2, the target is dazed. In addition, the target takes ongoing 10 psychic damage per tier while within 10 squares of a human or demi-human child. The firstborn child of the target contracts a mild illness of the DM’s choice.

Stage 3: While affected by stage 3, the target is dazed and weakened. In addition, the target takes ongoing 10 psychic damage per tier while within 20 squares of a human or demi-human child. The firstborn child’s illness becomes severe.

Ending the Curse: The target brings the heart of their firstborn son or daughter to the tomb of the pharaoh who laid the curse. Alternatively, the curse ends if the target fathers or mothers a child with a descendant of that pharaoh.

Parchment wrappings soaked in perfume twist around your arms and legs, mummifying you in an instant.

Pair a trap with this power with skirmishers or lurkers that gain a distinct advantage over slowed and immobilized PCs. Encounters where movement and positioning are crucial make excellent candidates for traps with Embalming Bonds.

Firevenom of the Royal Cobra

A jade cobra perched on the statue’s head ignites a spray of sand with a noxious green flame. When the searing grit settles, fire coils around you, lashing out at those who come to your aid.

This power works well with any blaster trap and is especially devastating against large groups of PCs.

Sand and salt clot the wound, and the skin around the gash peels like burning parchment.

One of the most common wards laid by the pharaoh’s trapsmiths, rotting curse is both versatile and deadly.

The moment the dart strikes your breastplate, it unfurls two sets of wriggling legs and buzzing wings that tap against the iron. Hieroglyphs on its carapace radiate wisps of incense, drawing a tangle of snakes out of the wall.

As the name implies, a trap with this power should be paired with swarm monsters, such as snakes.

[m] Swarmscribed Scarab • At-Will
Trigger—The trap hits a living creature with a ranged attack.
Attack (No Action)—Level + 3 vs. Fortitude.
Hit—The missile polymorphs into a jade scarab, which burrows into the target’s flesh and crawls toward its liver. The target takes ongoing 5 damage per tier and gains vulnerable 5 swarms per tier (save ends both). Third Failed Save—The target loses two healing surges and is wracked with boils and lesions that last until Remove Affliction removes it. While affected, any Bluff and Diplomacy checks made by the target during a skill challenge count as two failures if unsuccessful.
Special—Whenever the target fails a saving throw against this effect, all swarms within 5 squares may shift 2 squares toward the target as an immediate reaction.

A lidless eye wreathed in makeup gazes out from the obelisk, its hypnotic curvature projecting the desires of a hierophant whom even the gods fear.

While a trap with this power is best used to neutralize a leader or defender in the adventuring party, it’s especially effective when paired with elite monsters that benefit from having allies.

[r] Unblinking Wedjat (fear, gaze) • Recharge 5, 6
Trigger—A living creature moves into or starts its turn within line of sight of the trap.
Attack (Immediate Interrupt)—Level + 3 vs. Will.
Hit—Limited psychic damage by level, and the target is dominated (save ends). Third Failed Save—The target is dominated (no save).
Aftereffect—The target takes ongoing 5 psychic damage per tier while within the area of effect of a scrying ritual (no save).

This sample trap was made by applying the rotting curse and unblinking wedjat powers to the pendulum scythes trap (see Dungeon Master’s Guide).

A row of bladed sunwheels fixed to brass beams swing across the tomb’s entrance. A jade wedjat scribed onto the surface of each disk glows under a film of grime, sand, and blood.

[r] Unblinking Wedjat (fear, gaze) • Recharge 5, 6
Trigger—A living creature moves into or starts its turn within pendulum’s line of sight.
Attack (Immediate Interrupt)—+9 vs. Will.
Hit—3d6+5 psychic damage, and the target is dominated (save ends). Third Failed Save—The target is dominated (no save).
Aftereffect—The target takes ongoing 5 psychic damage while within the area of effect of a scrying ritual (no save).

6 thoughts on “Trap Themes (Part 2 of 5): Curses of the Dread Pharaoh”