Skip to content
Home / Delve into the Depths in the Kobold Blog / Grand Duchy: Spring Intrigues at Court 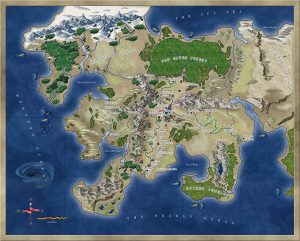 The Beloved Imperatrix’s court is a regal setting, befitting the station of the Copper Sphinx Throne. To be sure, Regia Moonthorn sets the tone for the day—playful, amused, concerned, or icily disapproving—but she always commands the respectful attention of her courtiers.

Outside the court’s closed doors, nobles, diplomats, and merchants jostle, boast, accuse, plead, plot, negotiate, and deal. It’s a hubbub that rivals Reywald’s Bridge Market on Monday. If there weren’t raised voices in the hall outside court, there would be concerns.

But with spring, the agitation of the outer court is always more pronounced. New petitioners bring new possibilities. As the fair folk prepare to celebrate the Rites of Spring, an old tradition gets tested, a princess sees a chance to upend a powerful rival, and a dashing newcomer has a plan Her Majesty thinks is audacious but dangerous.

There is much conjecture on what child the Imperatrix will choose for the Day of Misrule for the city where the Moveable Feast is located. Will it be a child of noble blood or a child of common origins with noble bearing?

Old hands at court find it mildly entertaining to watch the leading families clamber over one another to have sons, daughters, and of course, grandchildren, presented for nomination.

But this is a minor amusement—a respite from the affairs of state. For the courtiers gleefully watch as most children have interests other than standing still in finery, such as scampering across the court in whatever games and chases catch their fancy—to their sponsors’ mortifying embarrassment.

While courtiers find merriment and sport in all the ways that nobles work to undercut each other in this pageant of elven kiddies, it comes to no one’s surprise that Regia gives considerable thought to the selection. Her agents are also working busily, secretly visiting the city’s orphanages, observing the families of simple crafters, screening the offspring of the faithful, and getting to know the children of watch captains. And Regina finds time to know the children of her household’s own servants. All seeking the one pure in heart, mind and purpose.

And someone who will make the Day of Misrule fun, to the surprise and delight of all.

Less engaging, but politically more pressing, is how the feud between the princess of Reywald and the Abbess of the Twinned Cathedral is being played out by their agents.

During the Rite of Spring, priests of Yarila and Porevit are planting seeds of discord in the countryside, subjects loyal to Lyndosa Aldous-Donner say accusingly. The church is always looking to undermine the authority of the princess, they add.

Why else would Saintmistress Rowanmantle send priests and trusted lay leaders to remote farmhouses in the countryside around Reywald? But is there something more? Is the princess actually concerned that the church is trying to ferret out the location of hidden caches of antiquities and those whispered of places of exchange. Such places are rumored to be where the house of Aldous-Donner deals secretly with private collectors and southern princes, supporting with coin and goodwill the only means the princess has of countering the saintmistress’s growing influence because of the Donnermark settlement.

While the feud is a private party, as far as the principal players are concerned, there’s always a chance that interlopers—like some opportunistic adventurers—might play a hand.

A Dash of Danger

As for creating a stir, a minor but ruggedly handsome elfmarked lord from the foothills of Jerriberg has set Her Majesty’s attendants gossiping in admiration.

Ramey Hawthornden has been in the outer court almost daily, rallying itchy warriors with pledges of glory-seeking and pursuits befitting those with an adventuring spirit. It’s one thing for armsfolk in Regia Moonthorn’s retinue to be receptive to his rallying, but she had to roll her black dilated eyes when her chief handmaiden joined the gaggle of her flightier confidents with the observation: “He cuts a fine figure in his chainmail and tabard, don’t you think, your Majesty?”

Yet, one does not just waltz into Regia’s court. So Hawthornden has been making friends and currying favor, moving up the line hoping to gain access. Regia has not made it easy, directing with a subtle hand her own courtiers to confound and redirect his appeals. Still, the elfmarked lord has guile enough for a cartload of Grisal scalds, the question Regia wants answered is his steadfastness and determination.

Young lords want to prove themselves. But Hawthornden’s objective is more than just permission to pursue a personal quest. He has an audacious plan. He needs money, arms, and bands of dedicated fighters willing to penetrate the Goblin Wastes with the goal of pacifying it, split it apart from the Western Wastes along the line of the Melano River extending north, and create new territories for the Grand Duchy of Dornig to rule.

Tired of fearing what unmentionable horde might come driving up the Bone Road, Hawnthornden wants to lead a campaign into the heart of that darkness.

The plan has appeal. It stirs the heart of every elf eager to strike a blow at the enemy. But warmongering has its own perils, and Regia is keeping her own counsel on this matter.