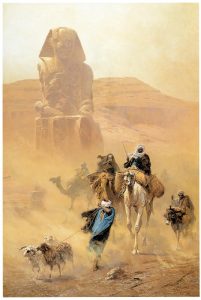 Adam Daigle has joined in on the Southlands Kickstarter project, and today he shares with you a bit about himself and his work on this project.

I first started playing around in the world of Midgard when it was just a crossroads city called Zobeck. At this point, Kickstarter wasn’t even a thing, and Wolfgang was crowdsourcing the nascent Midgard Campaign Setting using a form many here know as Open Design’s patronage model. Patronage wasn’t a new concept, but how it was being used for creating vibrant RPG material was certainly new to me.

The first Open Design project I joined was Blood of the Gorgon back in February of 2008—a mere month before my first-ever paid RPG freelance work was published by Highmoon Media Productions (a mini adventure called “The Havenmine Gauntlet” that was sent out to Kobold Quarterly subscribers somewhere around the magazine’s 4th volume). During that first project, I just lurked and learned the process, and then when the Tales of Zobeck project started up, I signed on again and got ready to pitch my ideas.

I pitched a short adventure to Tales of Zobeck, but it didn’t win enough of the votes needed make it into the book. (Interestingly enough, I repurposed that pitch and used it for the first volume of Adventure Quarterly that Liz Courts started up and eventually passed on to Rite Publishing.)

A bit later, the next Open Design project, Halls of the Mountain King, started up and I again pitched some more ideas. This time things stuck and I got some monsters in that project.

The Open Design process was invaluable to me as a budding designer. I had the opportunity to put my ideas in front of a group of my peers long before publication and was able to receive feedback on the weak and strong points of those ideas. I had the chance to learn from people far more established (and talented) than myself, and in turn I had the chance (as I developed my skills) to help others along the path with my own feedback and advice.

It’s been a while since I’ve had the chance to work with Wolfgang, so when he reached out and asked me to be a part of the Southlands, I was excited. He had three offerings for me (plus the awesome opportunity to pitch my own ideas), and while all the things he proposed to me were exciting, I know my limits. Of the three offers, I ended up taking the one with the shortest wordcount and the longest deadline. I would have loved to participate in a greater capacity, but I’ve piled a number of things onto my freelance plate in the last month or two and needed to take a serious look at what I can accomplish in the best way possible in the time provided. So, here’s a preview of what I’m bringing to the Southlands.

On the clear waters of Lake Debari, deep in the middle of the Abandoned Lands, floats an entire town. Surrounded by one of the most dangerous regions in the Southlands, the people of Munayo live their entire lives on the lake, refusing to step foot on solid ground as the result of an ancient pact. Hundreds of fishing boats and flat-bottomed barges lashed together and threaded through with floating docks form this ever-shifting community. While many of the boats come and go, some of them have been docked to the core of Munayo for decades. The shape of the town’s outer edges changes constantly as the vessels set out on the lake to fish its rich waters in the morning and return to the fold as the sun drops to the horizon. This community floats along with the currents of the lake, fishing and diving for freshwater pearls that they use to trade with the few merchants who brave the Abandoned Lands.

What many outsiders don’t realize is that the depths of the lake hold the ruins of a marid city whose spires nearly reach the lake’s surface. The strongest of Munayo’s divers have explored the tops of these towers, but they don’t dare venture deeper and risk waking the behemoth that slumbers below—the same behemoth that destroyed the city of marids.

The people of Munayo claim that they live their life on the vast lake because they have sworn to guard against this catastrophic threat that sleeps at the bottom of Lake Debari—a threat they know they must one day defeat when it wakes. So now they wait, constantly training for the eventual battle and watching the shifting currents of the lake, reading the water’s movement for portents of their destiny.

2 thoughts on “From Zobeck to the Southlands”