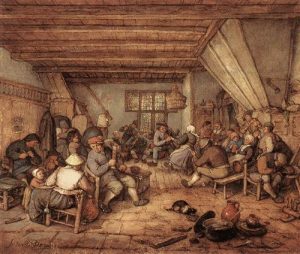 The Headhunters are a renowned band of adventurers, known throughout the nation for their bravery, daring, and at times suicidal pursuit of getting the job done. Gordran Halfhand, the hulking bruiser, has never lost a duel. Semran Nightshade was one of the most infamous graduates of her arcane academy. Edelweiss Lightfingers has beaten a dozen charges for thievery, but never seems to run out of money. Rounding them out is the pious Temple “The Tankard” Church, whose post-adventure revelries are the things legends are made of.

They’ve raided goblin warrens, gone head-to-head with savage warlords, and broken the stranglehold of the necromancer Harid-Hel and her dark army. But when they come to the Dragon’s Keg, they say “yes, please” and “thank you,” and they always make sure they leave their weapons at the door. Because if they don’t, the dwarf with the scarred knuckles and the half-elf with the distractingly graceful walk will ask them to leave. And the last time that happened, Church spent the rest of the following day putting his comrades’ busted heads, cracked ribs, and shattered pride back together—all thanks to the Brotherhood of the Brawl.

What Is the Brotherhood of the Brawl?

The Brotherhood of the Brawl can best be summed up as a training ground for fist-fighters, grapplers, and unarmed warriors who have no use for the self-important philosophies of “traditional” martial arts. The brothers and sisters have very little interest in the greater mysteries of the universe, or in devoting themselves to endless forms in the pursuit of perfect movements. The Brawlers are more concerned with the flow of a room and the liquid motions of the fight.

Another thing that separates the Brotherhood from other monastic traditions is that it’s a hodgepodge of styles. Some of the devotees of the Brawlers focus on grappling, using their skill and strength to bring down even the mightiest foes in seconds. Others practice disarming and tripping foes, leaving themselves as the last ones standing on the battlefield. Some Brawlers imbibe tankards of alcohol, using the powerful brews to shrug off blows, or even to adopt a difficult-to-predict style. The only universal truth about fighting a Brother or Sister, though, is that they never fight fair.

The Brotherhood in Your Game

Every game has a tavern, and the more of a risk adventurers pose to the security of your local barkeeps, the more likely it is for the Brothers and Sisters to have a presence in your world. If your party needs to pick up on rumors in the city, then the Brotherhood can act as an informal network of eyes and ears in the dives and alehouses in every district. If a PC needs a background to explain a fighting style that relies on knockout blows and dirty trick combat maneuvers, a former devotee of the Brawlers who became an adventurer would be a great explanation for this form of martial prowess. If the party is looking for allies and breaks up a bar brawl with little to no collateral damage, then word might get around to the Brothers and Sisters that these adventurers are okay to work with. They’ll scratch your back, if you scratch theirs.

For GMs who want to shape the Brotherhood even further, there are all sorts of possibilities. For example, there might be a sect that makes pilgrimages to dwarven mead halls to learn from the acrobatic Falling Stones. There may be half-orcs who mix a nearly toxic brew, and who use it to fuel their prowess for short periods of time. Followers of the god of wine and beer, whoever that is in your campaign, might give unofficial status to Brothers and Sisters within the church as protectors of their mahogany altars.

How to Recognize a Member

There are no official signs or symbols for the Brotherhood of the Brawl, but that doesn’t mean canny observers won’t be able to recognize them. Someone with scarred, sunken knuckles might be any sort of street brawler, but if that same someone seems to always know what’s happening in the crowd around her and can react quickly, those are signs people might notice. Local chapters might have different names for members, like “head buster” or “trash tosser.” There might even be a ranking system in certain cities where members are assigned a finger (pinky for the least, thumb for the highest), and where a team of Brawlers is known as a fist.

The lore can be as wide and varied as you want. Perhaps the local legend is that this section of the Brotherhood was started by a retired adventurer, who used his bar as a place to train others in his fighting style. Or, perhaps, there has been a standing challenge in a tavern that anyone who bests the bouncer gets a free drink, and the only person who ever did it was the first Sister who came to the town. Whatever you need, the Brotherhood can be made to order.

1 thought on “The Brotherhood of The Brawl”