Skip to content
Home / Delve into the Depths in the Kobold Blog / Book Review: In Thunder Forged—Iron Kingdoms Chronicles 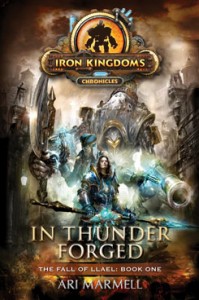 In Thunder Forged is part of the Iron Kingdoms Chronicles, which are stories based on the Warmachine steam-powered fantasy wargame. I have never played Warmachine (sorry, Pedro), so I was not completely familiar with the factions involved in this military fantasy thriller that does double duty as a Cold-War style cloak-and-dagger spy novel.

If you are not familiar with Warmachine, here is the deal: This wargame is filled with steam-powered warmachines (called warjacks), magic, guns, and knights, to name a few elements. Heck, you’ll even see gunmages. Normally I would question how and even why someone would novelize a tactical wargame—but then I read this book. Sure Warhammer did it, but Warmachine? I just didn’t see it coming, but I’m glad that it did.

In this book, a powerful and possibly war-changing alchemical formula has been stolen and factions have gone all-in to obtain or recover it. The quest for this formula pits a robust intelligence apparatus against an elite unit that has some of the best that the country of Cygnar has to offer. So what you have is what I call a hybrid espo-military thriller that does both surprisingly well. The intrigue has layers (like ogres and onions) that grow more complex as the story progresses. The combination of so many genres can sometimes result in a messy failure, but Ari Marmell managed this melting pot deftly and, in the process, created exciting fight scenes, epic explosions, and cunning intrigue.

When discussing this novel, I think it is important to cue on the steam-powered element rather than think fully in terms of steampunk. Though many similarities between the two exist, this novel didn’t default to the normal steampunk tropes. Yes, you’ll see steam-powered machines in this novel, but the inclusion of magic and guns really just makes the steam another aspect of this story rather than the focus.

Because of my lack of knowledge of the world, it took me a few minutes to figure out everything that was going on, but Marmell did a good job of getting me caught up on the setting on the fly. I know there were some cool things that I missed because I’m not familiar with the setting, but I didn’t feel left out.

If you play Warmachine, this novel should appeal to you. But if you don’t? The good news is that this novel is still a good read. In Thunder Forged has some great skirmish ideas and some excellent material for a non-tactical roleplaying games as well. Spies, alchemical formulas, guns, knights, gunmages, steam-powered machines, explosions, infiltration, backstabbing—what’s not to like?