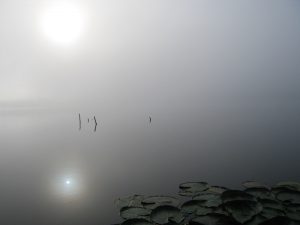 I remember the last season my family ever farmed.

That cloud—dirty crimson in color, like dried blood—drifted down the foothills like dust blown from the cover of an old book. Every crop it touched withered. The maize hardened and peeled, the berries soured, and the potatoes rotted before we could pull them from the dirt.

The livestock in our shed perished soon after. The mist seemed so thorough in its ravages that I found a halo of dead flies around each of the bloated heifers and chickens…

The sick in the village did not heal, the mothers did not give birth, and the children did not grow. The broken cobblestone streets were littered with the hungry, their bodies consuming the dried flesh that still clung to their brittle frames.

Those very few of us that lived through the autumn season—sustained by the grace of a benevolent or amused god, no doubt—set off into the mountains nearby and prayed for wind.

There would be no harvest celebration that season, even if anyone had lived to celebrate it.

Famine mist is a dusty, dark red cloud that drifts into civilized centers unimpeded by stone walls or iron barricades. Food and water exposed to famine mist spoil in a matter of seconds, and living things coming into contact with it become unable to draw sustenance from eating or drinking. Plants too are susceptible to famine mist and typically wither in an hour’s time, often less.

None know the origin of famine mist, and cities that never encounter it are fortunate in this regard. Worshippers of Iltotec, the Goddess of Drought, believe that the hazard is corpse dust blown from the vestige of a dead god that is buried beneath the crust of the world. Others disagree, insisting that the mist is a curse sent by Mother Hunger to punish settlements that are irresponsible with their stores of food and fresh water.

In any case, those who have experienced famine mist know for certain that it leaves rotting fiefdoms, dried bones, and abandoned metropolises in its silent wake.

A ruddy mist envelops you, spoiling the food in your pack and draining the nourishment from your body.

Hazard A cloud of famine mist fills a 5×5 square area and drifts 1d4 squares in a random direction each round; creatures standing in the cloud gain concealment

Trigger When a living creature starts its turn in a square of famine mist, the hazard attacks

Attack
No Action            Melee 0
Target The triggering creature
Attack Level + 5 vs. Fortitude
Hit Normal medium poison damage by level, and the target is weakened and cannot consume potions or elixirs (save ends)
Effect One day’s worth of rations the target is carrying spoils

Countermeasures
◊ Creatures that do not need to eat or drink are unaffected by famine mist
◊ You can resist the effects of famine mist with a minor action and a DC 12 + 1/2 hazard level Endurance check until the start of your next turn; this does not prevent the famine mist from spoiling rations
◊ Dealing at least 10 cold damage to a cloud of famine mist suppresses it until the end of its next turn

While famine mist poses a reasonable threat to PCs in both combat and noncombat encounters, the hazard is less than intimidating in adventures where characters are not asked to keep track of rations. That being said, GMs who typically do not have players track food and water are encouraged to have them do so for a single adventure that includes the famine mist as a centerpiece hazard.

Enemies that have no need for sustenance are known to implement famine mist as part of a weapon or trap. Undead creatures, huecuva especially, carry the mist in censers, and temples guarded by constructs or summoned monsters might be fitted with vents that flood trapped chambers with the dust.

Famine mist also has usefulness for your campaign beyond what’s described in the stat block. Some clouds are miles across in width and threaten entire cities, if not entire regions, and make for an engaging and dramatic plot device for a campaign in any setting. If the PCs are adventuring in an area completely shrouded by famine mist, consider instead treating famine mist as a disease that attacks any creature taking an extended rest while exposed to it (see below).

You are cured.
< Initial Effect You are weakened.
<> You are weakened and cannot consume potions or elixirs. In addition, you cannot gain nourishment from eating or drinking and suffer a -5 penalty to Endurance checks.
> Final State You die.

So… hungry… Won’t anyone spare a small, tasty comment to sustain me?