Skip to content
Home / Delve into the Depths in the Kobold Blog / Full Sleeve Midgard: Variant Gauntlet Witches for Elves and Dwarves (Part 5) 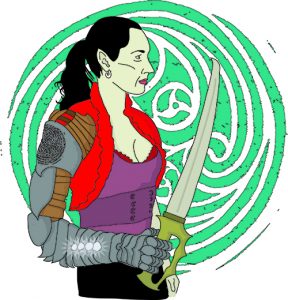 The gauntlet witch archetype first appeared in Kobold Quarterly #23, offering a vibrant alternate option for playing a witch. This article details the elf and dwarf racial variants of the gauntlet witch in Midgard.

A filigreed gauntlet witch’s ancestor gauntlet has the following modifications.

Fashioned from mithral plates and incised with silver and gold tracery, the ancestor gauntlet is a wondrous example of an elf smith’s craft. Fine interlocking plates stretching from the wrist to the shoulder gift the wearer with unmatched maneuverability and protection. A delicate gauntlet, similarly articulated, covers the hand. An ancestor gauntlet is occasionally further adorned with pearls or inlay of white or blue shell—forest and ocean themes predominate.

Lore: In addition to the benefits listed under eldritch gauntlets, an ancestor gauntlet confers a further +1 bonus to an elf’s Spellcraft check made to identify the properties of magic items.

Arcane Empowerment: An ancestor gauntlet also confers an additional +1 bonus to caster level checks made to overcome spell resistance. This improves by 1 for every 5 levels of filigreed gauntlet witch the elf possesses. Note: This stacks with the Spell Penetration and Greater Spell Penetration feats.

Accompanying dwarven delving parties and mining squads, hammerfist witches combine their arcane acumen with burly force and the power to shake the earth itself by bearing powerful mining gauntlets, sometimes known as quake– or tremor-gauntlets. Almost exclusively a product of the cantons of the Ironcrags, hammerfist witches serve their clans faithfully. They are occasionally loaned by their clan-lords as bodyguards to other dwarves or hired out for emissary protection duties. Rarely, a hammerfist witch breaks with his or her people and seeks a greater destiny in the wider world of Midgard.

A hammerfist witch’s mining gauntlet has the following modifications.

Mining gauntlets are forged from the hardest steel and iron ore. Overlapping plates create a bulky but surprisingly movable armor. The gauntlet spikes are often cut diamond or other superhard crystalline material; these spikes inflict 1d6 damage. Due to the construction, size, materials, and shape of the mining gauntlet, attacks made with the fist may deal bludgeoning or piercing damage.

Mining gauntlets are less focused on intelligence and perform a more subservient tool role than a regular eldritch gauntlet. As such, they do not possess the telepathy, lore, or legend lore ability. In keeping with their less combat-focused orientation, mining gauntlets do not have the pain clasp, improved pain clasp, or drain husk ability.

Sapience: A mining gauntlet is possessed of a limited awareness—it begins with an Intelligence of 5. It gains a point of Intelligence for every two levels of hammerfist witch the dwarf attains. Its Wisdom, Charisma, and Ego follow the regular eldritch gauntlet progression.

Empathy (Su): A mining gauntlet communicates with its wearer by mental and emotional impulses that only the hammerfist witch is aware of.

Delver’s Ken (Su): A mining gauntlet confers upon the wearer a +2 bonus to Knowledge (dungeoneering) and Knowledge (engineering). These skills are class skills for the hammerfist witch. This bonus increases by 1 for every 3 hammerfist witch levels.

Earthshaker (Su): At 3rd level, by pounding the ground as move action, the mining gauntlet creates a shock wave that spreads out through the ground and can be felt to a range of 30 feet. All those creatures standing on the ground within that area must make a Fortitude save (DC 10 + 1/2 the mining gauntlet’s ego score, rounded down) or fall prone and take 1d6 nonlethal damage.

Aftershock (Su): At 9th level, the hammerfist witch may choose to take a standard action to set up a series of reverberating, jolting shock waves. This functions exactly as earthshaker, but the effect lasts for 3 rounds +1 round for every two hammerfist witch levels. During this period, the DC is 12 + 1/2 the hammerfist witch’s level and any prone creatures must make a similar Fortitude check to stand up. Additionally, they take 1d6 nonlethal damage per round.

Excavation (Su): At 10th level, the mining gauntlet can dig into the earth at an incredible rate, gifting the hammerfist witch with a burrowing speed of 10 ft./round.