Skip to content
Home / Delve into the Depths in the Kobold Blog / Treasure Tables: Workshops and Laboratories 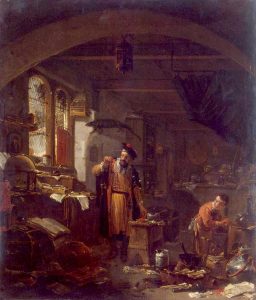 Magical and alchemical workshops are packed to the brim with valuables for adventurers who know what to look for, but certain things will stand out even to the untrained eye. If your adventurers decide they’re willing to risk annoying the previous owners, the following can be used to add a little variety to your loot or even as inspiration for a story hook. The value of the items can vary at the GM’s discretion but are suitable replacements for substantial coinage or a quest reward, although they could be worth more to the right person. You can roll randomly for a result below using the handy number provided with each entry to figure out your result on a d20. You can also pick one that works for the area in which your characters currently linger.

1. A series of tubes and hoses fed from the nearby wall produce a clean-burning small blue flame.

2. Dozens of clear glass vials and flasks of various sizes, each neatly labeled with straight lines and numbers.

3. A towering construction of glass tubes and hoses, which appears to be intended to separate the component parts of liquids.

4. A bizarre collection of assorted knick-knacks made of seemingly random materials; many are gold in color but have bizarre textures or properties.

6. A large, round-bottomed flask containing a faintly golden liquid which smells sweet, but overwhelmingly of alcohol.

7. Some sort of protective mask, consisting of a central mouthpiece with several attached blocks, all dangling from velvet-lined headgear.

8. A stiff black apron, its glossy appearance vaguely resembles oilcloth, but the material is unlike any other fabric.

9. A collection of similar bright red potions, each of which is labeled with a simple “no” on the bottle.

10. A small box filled with a collection of seemingly random stoppers in inexplicable sizes, from tiny corks to extravagant glass plugs, and others less immediately identifiable.

11. A large jar containing what appear to be a child’s left leg and right arm preserved in liquid.

12. Several small, well-used casks lining a shelf. One has been carefully stoppered and sealed, and is significantly heavier than the others.

14. A small, sturdy black cauldron inscribed around the rim with mystic symbols.

16. An assortment of tiny animated golems in various shapes, facing off between two miniature castles and wheeling about minuscule siege engines.

17. A pair of finely lettered documents preserved in wooden frames, behind glass. One seems to be granting a license to perform in the name of a king you do not recognize.

19. A deck of cards carefully organized within a small box. The card faces are beautiful but contain a great deal of seemingly meaningless text beneath hand-painted pictures.

20. A school of small lapis lazuli fish swimming gently through the air as though they were underwater.