Skip to content
Home / Delve into the Depths in the Kobold Blog / Howling Tower: Mounts 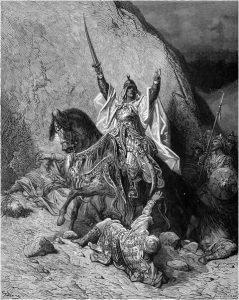 When is the last time one of your characters bothered to own a horse in a D&D game? How long has it been since anyone soared over the mountains on the back of a roc or traversed the underworld on a lizard or giant worm? Has anyone ever even seen a chariot?

Considering the importance of horses, wheels, and beasts of burden in ancient and medieval cultures of the real world, horses and other mounts seem to get short shrift in fantasy games.

Much of the fault lies with game designers who don’t include playable or satisfying rules for fighting while mounted or even for traveling on horseback. Whether that’s because they don’t know much about the subject and don’t want to spend the time on research, they have no interest in it themselves, or for some other reason, who can say?

The lack of Bucephalus, Sleipnir, Hengroen, Pegasus, Widow-maker, and even Bill the Pony is a shame, because a few animals can lift the fantasy quotient, change the tactical picture, and add a fresh element to play.

Horses are the most common mounts, so they are a good place to start. What’s true about them tends to be true of most others, with fantasy creatures ramping up one or another element such as speed, size, carrying capacity, viciousness, or adding a new ability such as flying or fire-breathing.

What does a mount do for characters?

Who’s carrying the tapestry? Over the editions of D&D, the carrying capacity of characters has slowly climbed until characters have become their own pack mules. There’s no good reason for this other than to eliminate the cost of a mule. Treasure can be bulky and difficult to carry. Items such as rugs, statues, gem-encrusted chests, and anything made of gold can be heavy. A good way for DMs to encourage the use of pack animals is to be sure that characters need to carry more than they can carry.

That’s a long way to walk. Like carrying capacity, games tend to overestimate how far people can walk in a day. Horses don’t actually walk much faster than people do, but they have more endurance. Thirty miles a day over untracked terrain would be grueling or impossible for people carrying loads, but horses can manage it for multiple days in a row. They can put out great bursts of speed over short distances and even over long distances if the rider is willing to see the horse drop dead when it reaches the destination.

We’ll catch them now! On the battlefield, horses are much faster than any person. That mobility is one of their chief advantages—an enemy on foot can’t escape the wrath of horsemen, and horsemen can fight or withdraw at their whim when faced only by infantry. If the orcs run, the characters ride them down mercilessly. If the orcs charge, the characters fall back while peppering them with arrows and spells. On a higher level, characters can strike deep into hostile territory, fleeing strong enemies and overwhelming weaker ones with lightning maneuvers.

Fear the horseman. Where players will really appreciate their animals is when they’re crushing orc skulls and spearing orcs in the back from galloping horses. Many games don’t reward horses in combat as much as they should, but that’s a simple fix. Simplicity is, in fact, the key. Give the horseman a reasonable bonus to both attack and defense, and characters will never go anywhere without their mounts. If a trained warhorse can attack on its own, so much the better.

Feel the wonder. Flying horses, burrowing worms, and fast-swimming whales add an element of fantasy that’s hard to get any other way. The sky is the limit when it comes to wondrous modes of travel and fighting.

What’s your tale of adventuring on the back of a horse, camel, or dragon?