Skip to content
Home / Delve into the Depths in the Kobold Blog / Monsters of Sin: Sloth Available Now. Or Soon, Anyway. 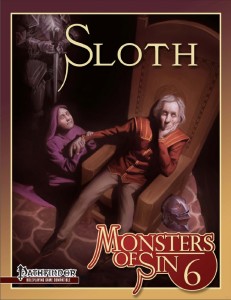 If ever there was a Monsters of Sin installment that should have been delayed from a Monday release to a Tuesday release, well this is the one. Maybe a little later in the day, because, you know.

Yes, this sixth book in the Monsters of Sin series is devoted to Sloth, the willingness to let things get worse because improving them would take too much effort and discomfort. It is the sin that can turn the most dynamic of adventurers into former heroes, a step too slow, a spell too late.

• The Flab Giant, a race slowly letting itself go to waste.
• The Scrap Drake: something more than a worm but less than a dragon.
• A creature that visits a cruel punishment on the active, the Slow Storm.
• The Embodiment of Sloth itself, immobile enticement to comfortable lethargy.
• Detail on Sloth within the Midgard Campaign Setting.
• Rules for incorporating Sloth into your NPCs and monsters.


Whether you’re running a Campaign of Sin, or simply want to slow the pace of a fast-action campaign, Monsters of Sin: Sloth demonstrates that sometimes inaction can be as dangerous as the most daring of actions.

So, strike back at Sloth — take action now to slow down your players!