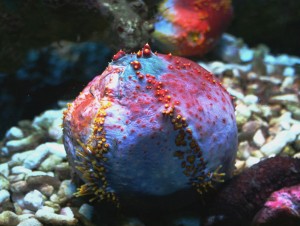 One of the most dreaded monsters of the underworld, strangling watchers (also known as urochars) have long plagued the drow, morlocks, and other humanoid races of the deep paths, feasting on the terrifying final moments of those caught in its crushing tentacles or who fall to its spell-like abilities…

SPECIAL ABILITIES
Death Throes (Ex) When killed, a strangling watcher releases a wave of pure soul-rending terror as all the fear it has consumed in its lifetime is unleashed to overwhelm the senses of those around it. All creatures within 60 ft. of the strangling watcher become panicked for 1d6 rounds (Will DC 27). Those who succeed their save are merely shaken for 1d6 rounds. Additionally, those who fail this first save must make a second Will save (DC 27) or take 2d6 Wisdom drain as their minds are assaulted by hundreds of years of accumulated dread.

Drink Fear (Su) A strangling watcher gains nourishment from the terror experienced by other creatures, drinking in a creature’s fear to power its alien physiology. A strangling watcher can remove fear from any target within 30 ft. as a swift action although it usually only does so once it is about to kill a victim.

Expert Climber (Ex) A strangling watcher’s tentacles are studded with thousands of tiny hooks that allow it to grab hold of virtually any surface. This allows it to move as if under the constant effects of a spider climb spell and grants it a +16 racial bonus on all Climb checks.

Fear Aura (Su) Fear—range 30 feet, save Will DC 27 (Charisma-based), creatures who fail their saving throws are frightened for 1d6 rounds.

Squeeze (Ex) Despite their size, strangling watchers have slender boneless bodies, enabling them to squeeze through passages up to 3 size categories smaller without affecting their movement or combat capabilities. This grants a strangling watcher a +8 racial bonus on all Escape Artist checks.

Rivalling the terrible neothelids in power, urochars spend much of their time as the ultimate voyeurs of the underworld, watching the life and death struggles of other creatures and drinking in their final moments from the safety of a nearby crevice or overhang. Often, however, this is not enough to satisfy the creature’s evil appetite, and it stalks lone guards or weakened groups of creatures to stare into their dying eyes with its great unblinking stare and feed on their final gasps of horror.

While all creatures that experience fear are potential prey to a strangling watcher, creatures that are immune to fear are attacked with equal relish, the monster seeing them as threats to its mastery over terror. Occasionally, a shoal of aboleths or a cluster of ropers forges a temporary alliance with a strangling watcher, allowing the beast to watch as they hunt down and destroy weaker creatures. Such alliances are temporary at best and usually end in violence between the parties concerned. Scavengers such as oozes and giant vermin often follow a strangling watcher to feast on the relatively intact bodies left in its wake, their lack of intelligence providing them with some safety from the monster’s depredations.

The central trunk of the strangling watcher is some 20 ft. long and ends in a massive unblinking orange eye. The tentacles radiating outwards from the central truck are thinner and over 30 ft. in length, while the feathery antenna around its eye are around 5 ft. long; they weigh in excess of 2 tons. Strangling watchers are effectively immortal, and gargantuan specimens found in the deepest reaches of the underworld are often several millennia old.